A Few Names to Faces at Lynn Valley Picnic, 1888 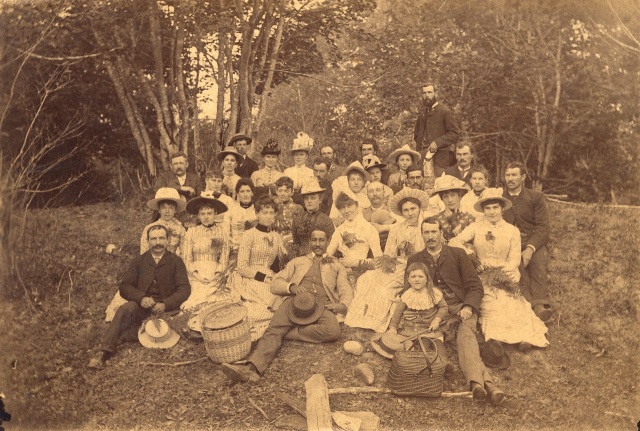 The image above was made by  an unknown photographer in 1888. It is unclear just what brought this group together, but what seems clear is that they are on a picnic and (according to CVA) the location of the picnic is Lynn Valley. Just how this group of predominantly women got to Lynn Valley from the city of Vancouver in 1888, dressed in their finery, I cannot say. If the photo had been taken, say, in 1907, it would not have been so hard to conceive – they would have taken the regular ferry over to Lonsdale (North Vancouver) and then climbed aboard the Lynn Valley trolly bus. How they got to Lynn Valley before the turn of the 20th century, however, I don’t know. CVA identifies a few of the picnicers, but (unfortunately) doesn’t point out where they were in the crowd. I may be able to help with that:

Whether the event was in fact a church picnic (as is suggested by the CVA record) seems to me to be an open question. Indeed, CVA seems to hedge its bets by showing in the “Related Subjects” column in this record “Religious Groups – Baptist” and “Religious Groups – Methodist”. It seems to me possible that this picnic was a group of churchgoers who were meeting for a reason that crossed denominational/doctrinal boundaries – temperance, for example. Indeed, just one year later, the First Temperance Convention (see second page of image plates following p. 10, These Sixty Years: 1887-1947 by W. M. Carmichael) would be held at First Baptist Church’s new building (corner Hamilton at Dunsmuir). Perhaps the image above shows an informal picnic gathering of a few of the likeminded individuals who would gather in larger numbers, more formally, a year later for the temperance convention.

1 Response to A Few Names to Faces at Lynn Valley Picnic, 1888