The “paint-in” at the court house (which is, today, the Vancouver Art Gallery) in 1966 was apparently a response by artists to B. C. Premier W. A. C. Bennett’s wish to keep the installation of the Centennial Fountain at the court house (see final image in this post) a secret until its official unveiling in 1967 — as part of the celebration of 100 years of Canadian confederation. Bennett surrounded the court building with wooden hoardings and artists responded as artists will do when blank canvas is publicly installed! There is no little irony in the story, as the Centennnial Fountain is apparently due to be removed sometime this year.

In the background of the image immediately below are the Devonshire Hotel (right) and the Medical-Dental Building, both on Georgia Street across from the court house, and both, today, demolished. 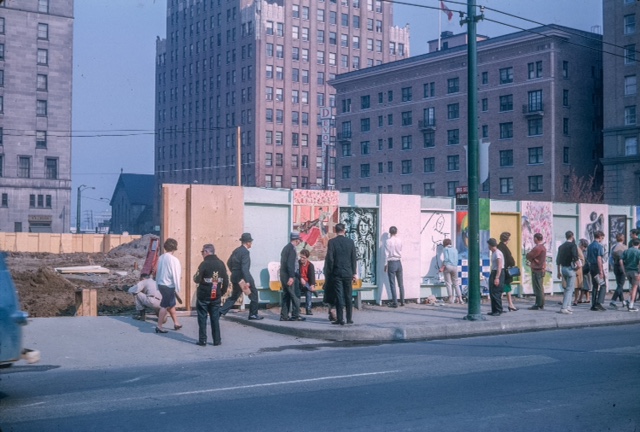 CVA 780-62 – [View of the B.C. Centennial Fountain, 750 Hornby Street at Georgia Street], 1969. This appears to be shot toward the northwest, with the Hotel Vancouver (and a piece of Christ Church Cathedral) in the background.