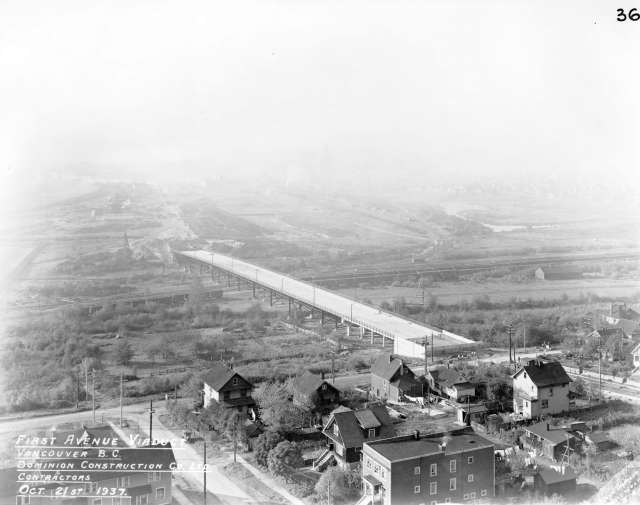 CVA – M-13-36. First Avenue Viaduct.Dominion Construction Company Limited, Contractors. 1937. Stuart Thomson photo. (Note: The near join of the viaduct with the existing street is at Terminal Avenue and Glen Dr. The far join is roughly at Clark Drive. There is a Home Deport located today at the SW corner of Terminal and Glen. One of the few constants between this area in 1937 and 2017 is that the rail lines and viaduct are in the same location.)

The very small grade change associated with the bridge once known widely as the First Avenue Viaduct contributes to its near-invisibility to the modern eye. The principal function of the pre-WWII viaduct was to allow motor traffic to travel over the rail yards in the false creek flats basin, thereby gaining swifter access to the Grandview/Commercial Drive communities. Unlike its nearby cousin, the current Georgia/Dunsmuir Viaduct, this bridge has not had to struggle with negative public relations associated with motives behind its birth. Instead, it has been apparently completely accepted by the general Vancouver public as a near-‘natural’ part of our urban landscape. High praise, indeed, for any bridge. 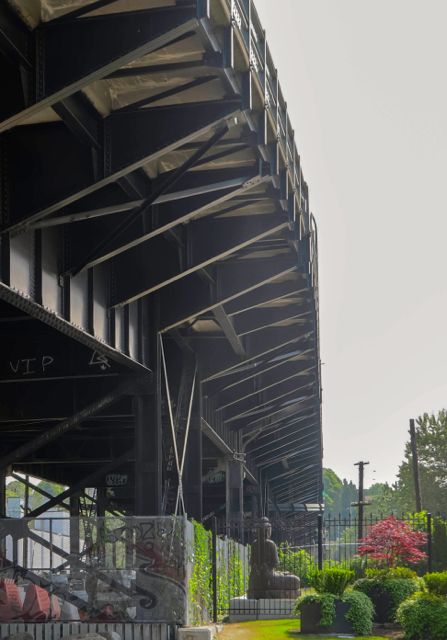 Today’s First Avenue Viaduct viewed from below it, looking upwards and to the northeast (from near the entry to the Home Depot store). 2015. Author’s photo.