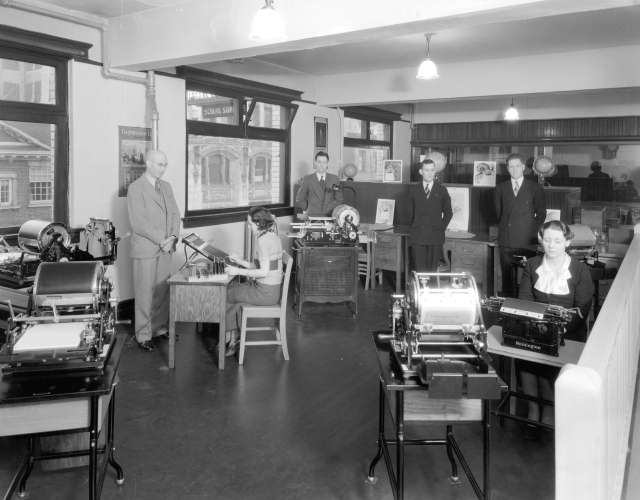 Most of the school supplies in this office building are recognizable to me. The 1930s version of the Remington typewriter, of course (with that almost unheard of technology, carbon paper inserted), variations on early document copiers (which I’m tempted to refer to generally – and, doubtless, inaccurately – as ‘Gestetner machines‘), wooden teacher desks that were ubiquitous in classrooms even when I was a student in primary and secondary schools decades later, globes, and educational posters.

One item which I was unable to immediately name, however, was the machine on which the woman near the centre of the image was working (and whom the balding fellow appears to be admiring). My wife identified this as a sort of early tracing machine which may have been used by art instructors and others for preparing classroom materials.

This office was in the still-standing 3-storey structure (1929?) shown below (far left). Stuart Thomson successfully captured not only the interior of the 1936 tableau, but also part of Clarke and Stuart’s exterior signage (which, if the dating is accurate, was due soon to be replaced with the sign shown in the W. J. Moore photo made one year later) and two of its still-existing across-the-street-building neighbours: — the apparently Georgian-inspired 543 Seymour (which would be CKWX radio’s downtown HQ for years, beginning in the 1940s, I believe; later home to the Canadian Armed Forces; in recent years, home for a series of private colleges and language schools) and the Seymour Building, at 525 Seymour (1920), known in its early years as the Yorkshire block.

James Duff Stuart (note: CVA shows his surname as “Stewart”; a misspelling) and Harold Clarke were the owners of the school supply purveyor shown above. For more about them and their apparently successful Vancouver business interests in several locations, see here and here.