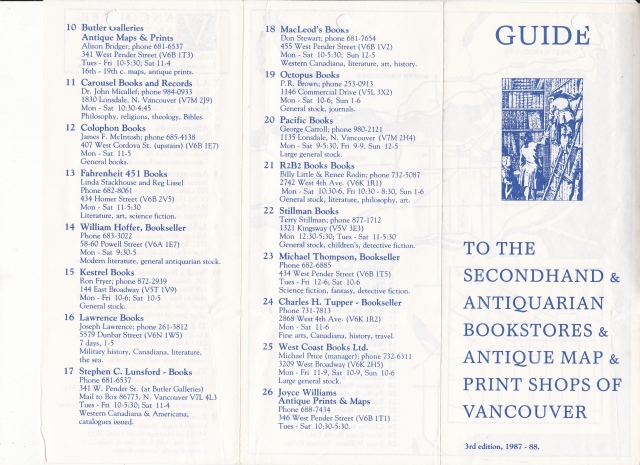 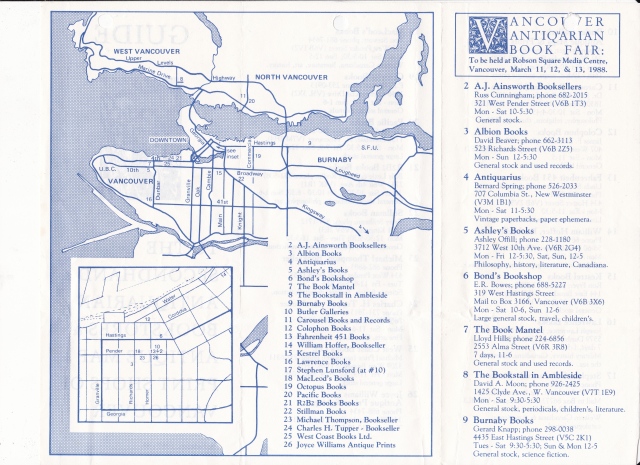 This is the first in a series of a posts I plan to write that will make public my collected editions of this Guide to the Secondhand and Antiquarian Bookstores & Antique Map Print Shops of Vancouver. My reason for making my editions of the Guide available is that, as far as I can tell, nobody else has*. I wish I could say that I had all of the editions of the Guide. The earliest edition I own is the one shown above, the 3rd (1987-88); I have all editions after that up to and including the 13th (2000-01), with the exception (frustratingly) of the 5th edition (1989-90).

There is a recent edition of a guide to Used and Antiquarian Bookstores of Greater Vancouver and the Fraser Valley available online here**. It plainly has as its ancestor the Guide shown above. This more contemporary pamphlet, however, bears the marks of the widespread North American rejection of books that have genuine covers and paper pages and, likewise, of bookstores that sell such things (with doors and walls, and booksellers within!)

There are relatively fewer secondhand booksellers in the City of Vancouver today than when I began coming to this city from Edmonton on book buying trips in 1988. A few giants continue to roam, however.

Bernard Spring of Antiquarius, which in 1987-88 was located in New Westminster; later, on ‘book row’ – Pender Street – in Vancouver; today, Spring continues to offer books and ephemera for sale online.

Lawrence Books of the Dunbar district, also continues. In 1987-88, though, it was under the management of the endearingly grumpy Joe Lawrence. Since his passing a number of years ago, it was operated first by his widow (until her passing) and afterwards by his daughter, Ann.

MacLeod’s Books is the only shop, I believe, that continues today to operate at the same location (455 West Pender) and under the same management (Don Stewart) as in 1987-88.

Michael Thompson had a charming shop full of unusual detective and science-fiction novels on Pender Street in the late 1980s. In 1987-88, his shop was located at the address occupied today by Criterion Books. I recall spending quite a few dollars in Thompson’s Vancouver shop and at least two of these volumes I still own. (My recollection of Thompson’s store site, though, is at a location not shown in any of the Guides in my collection. I remember him occupying the space at 343 West Pender, where Pender Grocery is today, adjacent to Finch’s Tea House). Today, he runs a shop on Hornby Island.

Joyce Williams Antique Prints & Maps operates today in Yaletown, but in the late 1980s did business out of a shop on West Pender adjacent to the space occupied today by another fine bookshop, The Paper Hound.

*It seems to me that I once found older editions of the Guide in UBC’s archival collection. But upon searching that site in preparation for this post, I wasn’t able to see any sign of the Guide there.

**The online edition that was present when I wrote this post, unfortunately, did not continue the practice of dating, and was not current. Indeed, there were shops listed – for example, Characters, formerly in Marpole, and Booktown, formerly in New Westminster – which have been out of business (to my continuing regret) for years.