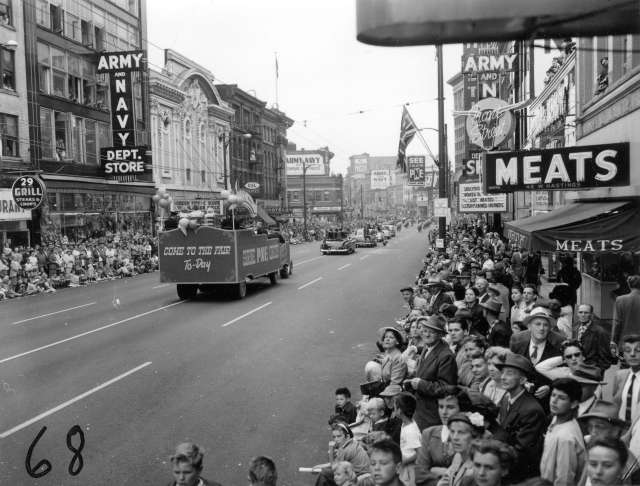 The first time I laid eyes on this photo, I saw the prominently displayed “MEATS” sign and immediately assumed I was looking at an early version of the Save On Meats sign – where it is today on the north side of the unit block of W. Hastings.

But, with further study, doubts developed about that conclusion and an internal debate began:

MDM1: Wait a minute… if the MEATS sign was on the north side of Hastings in 1955, as it is today, what is the Army & Navy department store doing opposite it?

MDM2: Well, 1, that isn’t difficult to answer. For many years, the Army & Navy had shops on both sides of W. Hastings, more or less opposite each other (a shoe dept. on one side and all other departments on the other).

MDM2: Not so fast, 1. Although you’ve successfully settled the question as to which side of the street the MEATS sign is on, you are wrong about it being the Save on Meats sign! In fact, if you’d allow your eyes to take in all of the signage in front of that shop, you’ll see a charming piece of neon with “Front Street” superimposed over a bull’s head. And if you check the BC City Directory for 1955, you’d see that a Front Street Meat Market was located at 46 W. Hastings!

And there is a little more to the story.

(Sonny) Wosk, whose portrait is on the right² (of the Wosks who owned the furniture shop on the south side of Hastings). The timeline seems to be as follows: Sonny acquired the original Front Street Meat Market from the Zezulas in 1954.

In 1955, Sonny opened another Front Street Meat Market at 46 (south side) W. Hastings, which he operated for a couple of years.

According to this history of Save on Meats…

When Save-on-Meats originally opened in 1957, the location at 43 West Hastings Street was still serviced by interurban trams that brought customers nearly to its door. Entrepreneur Sonny Wosk founded the business, bringing in a young Al DesLauriers to run the meat department. . . . and when Wosk was ready to sell, DesLauriers bought the business.

So in 1957, it appears that Sonny closed Vancouver’s short-lived Front Street Meat Market on the north side of W. Hastings and opened Save On Meats almost directly across the street.

¹The Zezula photo is from the 1947 issue of The Totem, the UBC Yearbook. Zezula was in the Commerce class of ’49.

²Wosk’s portrait is from the Jewish Museum and Archives of B.C.

2 Responses to The Hastings MEATS Puzzle