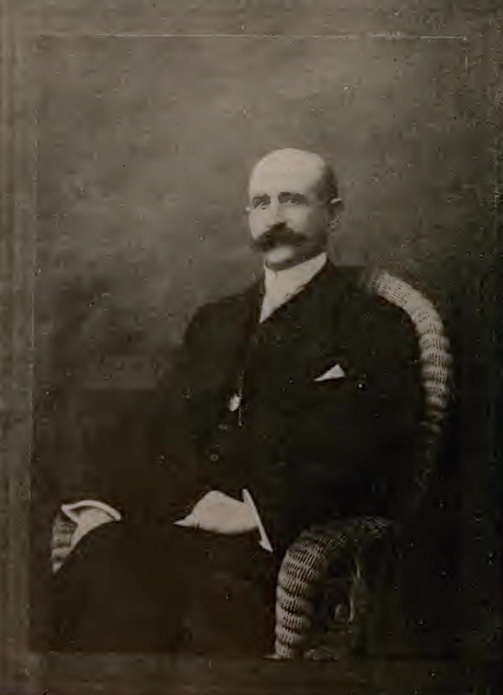 William James Cavanagh (c1862-1915) was a complex man with a complicated life. He was born in Leeds County, ON (near Brockville). He left there for Western Canada by about 1887. He stayed in Manitoba for a number of years where he worked for a couple of shoe companies as a travelling salesman and later as a bookkeeper. Towards the end of his time in Manitoba, he tried his hand at being a realtor – a career for which apparently he was well suited. He made his way circa 1902 to a larger and more lucrative realty market: Vancouver.

He continued to ply the realty trade here. He worked first for Baker, Leeson Company, then he opened a real estate office on Cordova (opposite the Grand Theatre) which was called Cavanagh, Baker & Leeson. In 1906, he dissolved his partnership with Baker and Leeson and established a new partnership, this time with William M. Holden.

In 1907, Cavanagh was elected by acclamation to City Council (Ward 3) and was re-elected for another one-year term in January, 1908.¹

I wasn’t able to see much evidence that Cavanagh was a big ‘ideas’ man, and many of his views that have been preserved in the public record were not to his credit, in my opinion.

He wanted to allow the Vancouver Driving Club to build a speedway around the Brockton Point end of Stanley Park (VDW² May 14). This was set aside by Council, fortunately.

After his 1908 re-election, Cavanagh included, in his “thank you” letter to Vancouver residents, the following remark: “Now that the elections are over, I wish to state that there is not a man in the city more opposed to the influx of Asiatics than I am, and I will do all in my power to put a stop to them entering this part of our fair Dominion.” (VDW 11 Jan 1908). In holding these anti-Asian views, he was by no means unique in the Vancouver of his time.

But Cavanagh also held at least one forward-thinking notion (and one which, in part at least, was put into practice, although that happened after his death):

Ald. W. J. Cavanagh who has just returned from a tour of the eastern cities in Canada and the States will henceforth be an enthusiastic advocate of public parks in the center of the city….  The whole of the two blocks from Hastings to Dunsmuir, on which the courthouse and the Central schools stand, should be acquired at once and a new site be found for the schools. These two blocks would make an ideal site for a central park. (VDW 15 June 1908)

This is the earliest proposal I’ve seen for a park where Victory Square would be established following the Great War. (And Victory Square only takes up one block; if Cavanagh had had his ‘druthers’, it would also have included the land on which VCC’s downtown campus presently resides).

The latter part of 1908 seems to have marked the beginning of William Cavanagh’s unhappy end.

Cavanagh liked to play the ponies; he held posts as vice-president and president of the Vancouver Jockey Club. I cannot prove that it was his love of horse racing and the gambling associated with it that led him to bankruptcy, but it seems probable. He was said to have lost “a fortune” in 1908.

His bankruptcy in 1908 led to his disqualification for holding his seat as a city alderman. There was a property qualification associated with aldermanic service at that time and all of his property was in the hands of his creditors by late 1908.

In April 1909, it was alleged by a Mr. Anderson, that Cavanagh had attempted to dispose of a piece of property (all of which, by then, in his creditors’ hands), and thereby defrauded his creditors.

Finally, on June 27, 1911, Cavanagh was arrested on a charge of bigamy. It was alleged that he married Lillian (Lilly) N. Campbell of Vancouver, while still married to Mary E. Cavanagh.

Greed of the Campbell Brothers

Lilly Campbell’s mother was Laura Campbell. Laura died in January, 1908. I don’t know what the terms of Laura Campbell’s will were, but whatever they were, it is clear that her two sons (Lilly’s brothers), Douglas and Graham, were not satisfied with them. The brothers wanted a bigger slice of Laura’s estate than she had left them. Apparently, Douglas and Graham had tried to negotiate a larger slice with their sister, Lilly, but she wasn’t having it.

Sometime in 1908, W. J. Cavanagh, on the advice of his physician, went to California. Lilly Campbell accompanied him. After they had been in California for about a week, they were wed.

The bigamy case against Cavanagh was not a civil suit. Bigamy was a crime, although I get the impression that even by this time, it was largely a dead-letter law; more often ignored than prosecuted, especially in cases such as this where the husband and his first wife had been living apart for a considerable period of time (according to one account, William and Mary had been living separately for 12 years).

It seems likely that Douglas and Graham Campbell had some influence with the Crown Prosecutor and persuaded him to bring the bigamy charge against Cavanagh. Press accounts of the bigamy trial contended that the Campbell brothers had instigated the trial to pressure their sister, Lilly, to come to their terms regarding their mothers’ estate. Indeed, Graham claimed during his testimony at the trial that he had considered bringing a charge of murder (of Laura) against Cavanagh — presumably to apply even more pressure on Lilly. (Campbell’s murder allegation seems not to have been taken seriously by the authorities).

Judge McInnes, the presiding judge at the bigamy trail, acquitted William Cavanagh of bigamy on a “technicality”. Cavanagh was plainly married to Mary Cavanagh when he married Lilly. But the Crown failed to prove that Cavanagh intended to marry Lilly when he set out for California with his soon-to-be-second-spouse. Because intent wasn’t proven,  the judge found that the Canadian court didn’t have jurisdiction over the second marriage.

A Casualty of Labelling

William Cavanagh left Vancouver shortly after the trial (probably for Seattle, where he died four years later). He no doubt felt that his reputation had been tarnished by the trial, even though he was acquitted. But I don’t feel too sorry for Cavanagh. He knew he was taking the risk of a bigamy trial when he married Lilly.

The person I feel bad for is Lilly. She, Douglas, and Laura were all members of First Baptist Church in Vancouver. The letter reproduced below was written by the Church Clerk, on behalf of the officers of the church to a Mrs. Brooks who seems to have been a member of First’s membership review committee.

The clerk explains Mrs. Brooks’ task to her:

“A short time ago Mr. Cavanagh was in court for bigamy and althought (sic) he was acquitted we think Mrs. [Lilly] Cavanagh should explain why she does not attend church and if she can give good and sufficent (sic) reasons why her name should not be dropped [from the membership roll].

This letter, it seems to me, finds Lilly guilty of bigamy by association with William (even though he was acquitted). Furthermore, the clerk places the onus on Lilly to explain why she should not be dropped from church membership. The grounds for dropping her from membership, seem to be her lack of attendance, recently, at worship services. But the label “bigamy”, earlier in the sentence, had already poisoned the apple. 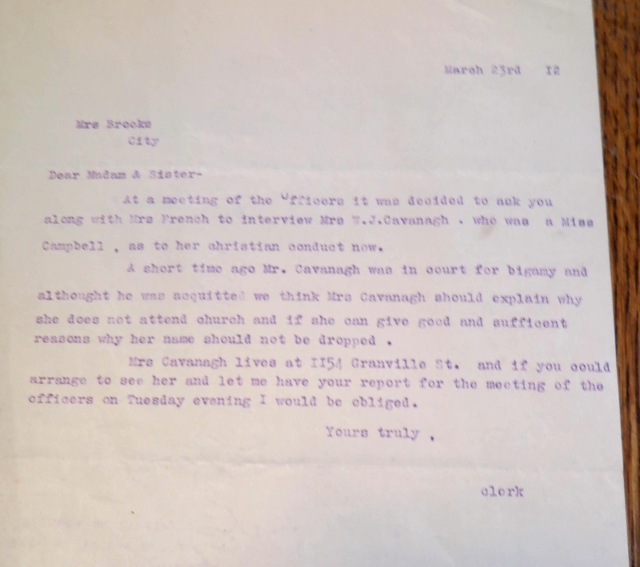 This wasn’t First Baptist’s finest hour, in my opinion.

¹Most of the details of WJC’s early life came from Westward Ho! magazine, 1907.