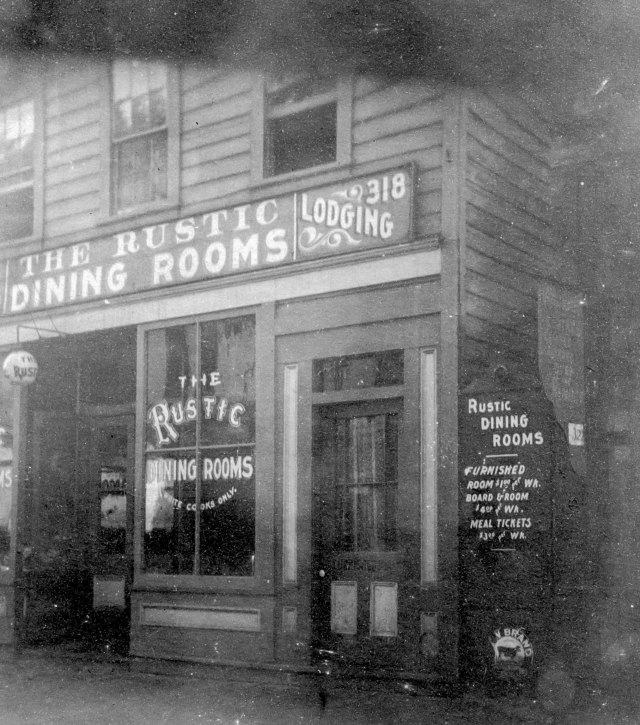 CVA 371-865 – Exterior of The Rustic Dining Rooms and Lodging House at 318 Cordova Street, ca 1901. Note: There is a ‘reassuring’ note on the window that they have “white cooks only” (presumably; the Asians, blacks and others of colour in the city at that time can’t have found this to be overly comforting!).

This image caught my attention when I was browsing through CVA’s photos recently. The Rustic was located at 318 Cordova St., just a couple of doors west of the extant Arlington Hotel (at the corner where Cordova meets Cambie), today an SRO, I’m assuming.

The Rustic seems from the exterior view to be pretty rustic. I couldn’t imagine what it must look like inside! But, to my surprise, a little more research gave me a pretty good idea of what it must have looked like just a couple of years earlier. I wasn’t expecting to see an interior photo, as it was uncommon for ‘flashlight’ images to be made this early, but there it was: the Rustic’s predecessor at this location, the Poodle Dog Hotel! 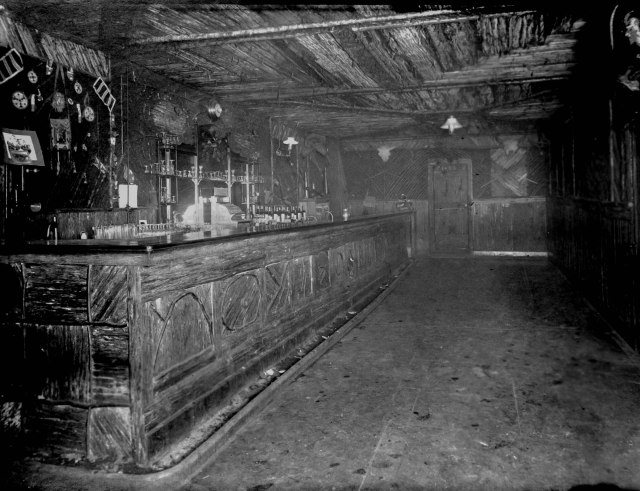 Hot P5 – Interior of Poodle Dog Hotel bar on Cordova between Cambie and Abbott Streets, ca1898. Note: I brightened this exposure digitally a bit, so that we could better see the interior details.

The name of this drinking establishment wasn’t by any means unique. There were other Poodle Dog dining rooms and bars in the B.C. at this time. I found evidence of a Poodle Dog in Nanaimo, for example, and a dining room of long-standing in Victoria. The Victoria restaurant specialized in French cuisine and was owned and operated by a Monsieur Louis Marbeouf.

But the Poodle Dog Hotel on Vancouver’s Cordova Street was decidedly not a French restaurant. Indeed, the image above shows only a bar room. But it was a bar with interesting details. According to a note in CVA’s collection:

The unique Poodle Dog Hotel bar was made of almost every kind of bark, cedar bark, vine, maple twigs, moss and fungus, etc., was built by George Cary for Bert Burton….The owner’s name was spelt out in big letters of maple branch twigs along the front…. [It] was illuminated with coal gas.

Perhaps your eyes are younger than mine and you are able to see Burton’s name spelled out with maple twigs on the front of the bar; but neither my eyes nor my imagination is up to the task, I’m afraid! Some of the detail that I can make out, however, are small pieces of indigenous leather work (in foreground) and (in background) the head of a big horn sheep.

If there are other details that you notice, please comment below.

2 Responses to The Poodle Dog