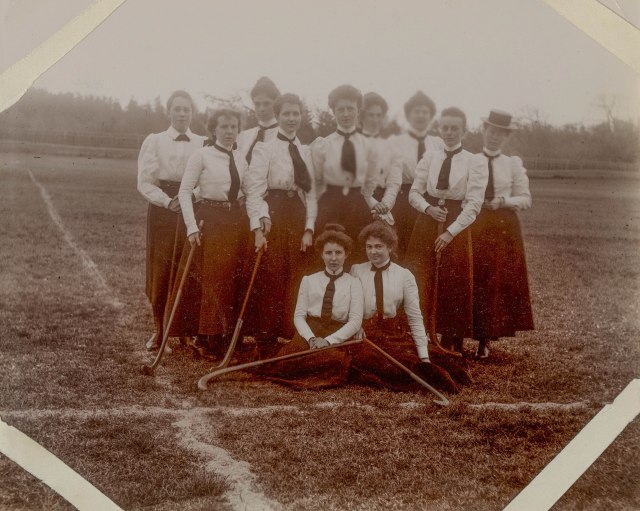 The photo shown above is of the Vancouver Ladies Grass Hockey team as it was in December 1900. The photo is from the album of William A. Bauer, a brother of one of the players, Maud Bauer.¹ This is among the earliest photos available today in public archives of BC grass hockey teams. Jason Beck, curator of the BC Sports Hall of Fame, whom I consulted, pointed out that “organized sport of any kind in Vancouver was very limited prior to 1895.” And that was roughly confirmed in my review of news reports of Ladies’ grass hockey (later “field hockey”) matches; I wasn’t able to find accounts dating back earlier than 1897.²

Ladies’ Grass Hockey went from apparently having only three teams (representing the cities of Vancouver, New Westminster, and Victoria) in its earliest years in B.C. to having several teams by the early years of the 20th century. By 1919, for example, there were (in what we’d today call Greater Vancouver) teams representing UBC (known as the Varsity team), King Edward high school, King George high school, Britannia high school, Vancouver Normal School, North Vancouver teachers, South Vancouver teachers, as well as the cities of Vancouver and New Westminster. Not all of the teams competed against each other. (For a contemporary list of women’s field hockey clubs in the Lower Mainland, see Field Hockey BC’s site.)

Early matches (certainly the popular ones of Victoria vs. Vancouver) were played at the Brockton Point grounds in Stanley Park. 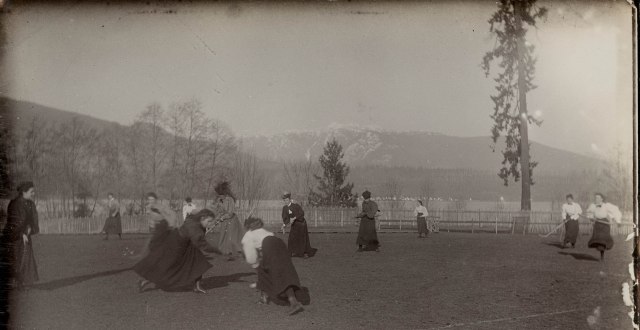 UL_1015_0018,UL_1015_0018. UBC Library Rare Books and Special Collections, Uno Langmann Collection. William A Bauer Photo Album. The City of Vancouver ladies’ grass hockey team. In action, I’m guessing, at Brockton Point in Stanley Park. ca1891-1901 (although I think it is safe to bring the earliest likely year in the range up to 1897). Photographer (presumably) is William A. Bauer.

Plainly, the uniforms of these very early teams are in stark contrast with those worn by today’s teams in B.C. and elsewhere. The equipment has likewise has changed over the decades. The wooden ball used in the early years, for example, is today made of plastic.

There was an early cup dedicated to be held by the winner of “friendly” ladies’ grass hockey matches in the early years. The Wilkerson Cup was provided by Mr. William H. Wilkerson (a Victoria watchmaker) for the winning team among (at least) three clubs: Vancouver, Victoria, and New Westminster (Vancouver Daily World, 21 October 1913).³ 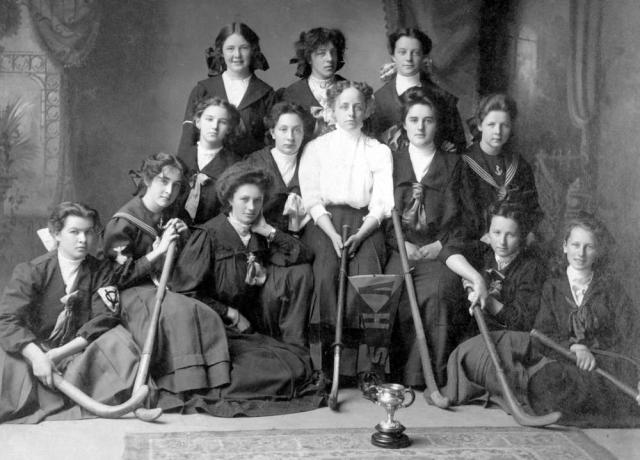 Item B-03501. Royal BC Archives. Victoria High School Girls’ Hockey Team, Cecilia Green in white blouse. 190-. The cup in the foreground, I’m assuming, is the Wilkerson Cup. My impression is that Victoria teams were most often victors against Lower Mainland teams. Photographer unknown. 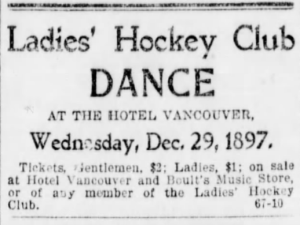 One feature of the early grass hockey rivalry between city teams in Vancouver and Victoria was the inclusion of a dance or “ball” to be held following the match. The home team would host their opponents. 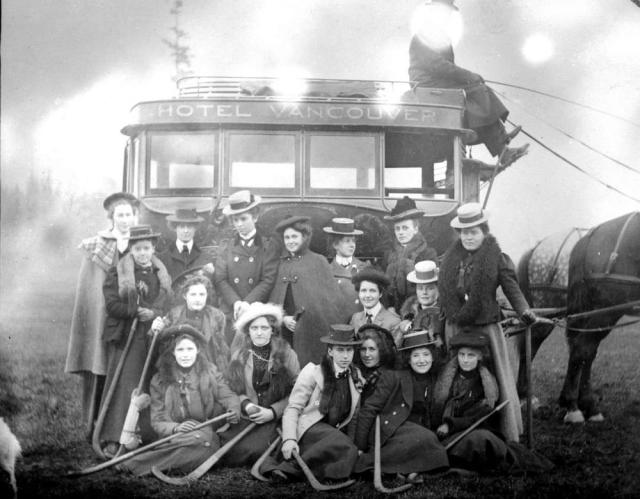 Item B-03482. Royal BC Archives. Victoria High School girls’ grass hockey team; posed with the bus from the Hotel Vancouver during a field trip. It seems likely that the girls were in Vancouver for one of the early matches with Vancouver, to be followed by a dance at the Hotel Vancouver. ca1901. Photographer unknown.

* The “Bully Off” was the way play was started (or restarted mid-game) between opposing grass hockey teams. It was similar to the “face off” in ice hockey or the “drop ball” in soccer. It involved two players from opposing teams alternately touching their sticks on the ground and against each other’s sticks before attempting to strike the ball. The bully off, reportedly, has not been used to start field hockey games since 1981.

¹Miss Maud Bauer (of the Vancouver field hockey team) shouldn’t be confused with Mrs. Maud Bauer (who became William’s wife in 1907). To help limit the confusion (I’m assuming), Mrs. Bauer was known by her middle name (Ruby) for most of her married life.

²One of the earliest accounts I found was in the 2 April 1897 edition of the Vancouver Daily World. This very brief report is reproduced in its entirety: “With sweet success upon their brows, the Vancouver ladies’ hockey team went down to Victoria to-day to play a team of that city to-morrow, having vanquished that of New Westminster on Wednesday. The players were accompanied by a number of friends, the party comprising: Mrs. Johnson, Mrs. Burns, Misses Smith, Boultbee, Boult, Philpot, M. Philpot, Bauer, (2) Taylor, Sully, Farron, Wilson, Revely, Marstrand, Rogers, and F. Crickmay.” Although some of the same surnames appear in this list as are in the caption of the 1900 photo shown initially in this post, it was impossible for me to suss out who among these were players and who were rooters (or “friends”). And the paragraph, likewise, was unhelpful in determining the first names – and thus identities – of these very early players. The meaning of the parenthetic numeral “(2)” is – if not a typographical error – a mystery to me.

³According to another, earlier, account by the Daily Colonist, the Wilkerson Cup was for competition among more than just the two clubs. According to this source, it was played for by Victoria, Vancouver, Vancouver High School girls club, the Vancouver Normal School, and McGill-BC (an early abbreviated descriptor of what became UBC; this had been accomplished by BC legislation in 1908 but, evidently, the Colonist was living in the past in 1910!)  (Daily Colonist 19 March, 1910).