How Victory Square and Its Cenotaph Came to Be

CVA 784-084 – Victory Square, 1986. The platform nestling amid the four tall trees was included in the Square in 1921. It was established for community singing one night each week (VDW 9 August 1921). This platform has also been used to advertise radios in the 1930s (see next photo).

From the vantage of 2018, it is all too easy to look at Victory Square and assume that one or two sentences can amply sum up the history of the place. One might say, for instance, that Victory Square was the first site of the Provincial Courthouse and that, after the ‘new’ courthouse was built on Georgia Street (between Hornby and Howe), the space became a memorial for Vancouver’s ‘boys’ who died in WWI. It has been the principal City site of Remembrance Day services since then. Those lines are an accurate but, I’ve discovered, incomplete representation of the history of the space.

The first post-city-incorporation structure on the site of what today is known as Victory Square was the provincial courthouse (1890-1913). The building wasn’t loved. Indeed, it was thought by many to be an eye-sore (VDW 30 April 1918).

CVA: Duke of C and Y P21 – The first provincial Courthouse decorated for the reception of the Duke and Duchess of Cornwall and York. Sept 1901. The camera was at the northwest corner (roughly at Hastings and Hamilton).

By 1906, work had begun on the new courthouse and while the old one would continue to be used for judicial purposes until the Georgia Street site was ready for occupation (1913), debate began in earnest as to what would become of the former courthouse and the prime real estate on which it sat.

As is the case whenever valuable property is up for grabs, there were rumours swirling about. One was that T. Eaton, the eastern Canadian department store magnate, wanted to acquire the land from the province to establish a Vancouver store (VDW 10 February 1906). Another was that the Great Northern Railway had offered to purchase the land and that they had plans to build a hotel on the site that would rival the CPR’s Hotel Vancouver (VDW 4 October 1906). Whether there was any truth to either of these rumours is impossible to know.

There were plenty of proposals on what to do with the site:

As part of the 1909 municipal election in Vancouver, a plebiscite question was put to residents as to whether they favoured the City acquiring the property. Although I don’t know what the specific percentages were, city residents were apparently very much in favour of the province handing over the site to the city (VDW 18 January 1909). 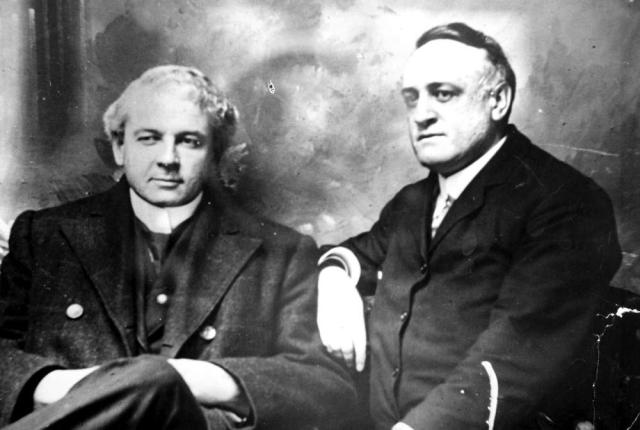 But the Conservative provincial government under Premier Richard McBride did not, evidently, feel greatly pressured by this municipal plebiscite. In 1912, Attorney General William Bowser announced that the province would sub-divide the courthouse property and sell the properties to private interests (VDW 22 June 1912). (I’ve seen estimates for the total value of the land ranging up to $1 million at this time. Doubtless, today, it would be off the charts value-wise.)

The outrage in Vancouver upon publication of this announcement was palpable. The Daily World  described Bowser’s plan as being “high-handed” and a “grievous injustice to the city.”

Great War and Change of Government

By 1915, for the first time in print as far as I can tell, a linkage was made between the Great War and the former courthouse site (the courthouse had been demolished in October 1913):

His Honor Judge Grant . . . referred to the losses sustained by the Canadian regiments, and said he thought it would be a fitting action of the government and patriotic societies combined for the purpose of erecting a monument to those of Canada’s sons who fell in the war. His honor suggested the site of the old courthouse as a spot suitable for such a tribute to the gallantry of the heroes of the war.
— VDW 26 April 1915

In September, 1916, the Conservatives were voted out of office and the Liberals under Premier H. C. Brewster were voted in. The new government (partly due, no doubt, to the changed circumstances of the Great War) showed signs of a different attitude to the question of handing over the old courthouse property to Vancouver.

By 1917, the legislation transferring the land — by a 99-year lease — to the city was introduced in the Legislative Assembly.

In the kind of peculiar twist that sometimes happens in politics, former Attorney General William Bowser (who by this time was on the Opposition benches) proposed that the bill be amended to remove the provincial lease of the property for 99 years to the city and instead make the land grant to the city absolute!

Mr Bowser said that he had read in the press that revival meetings are now being held on the old Vancouver courthouse site, and he jocularly remarked that perhaps the revivalists were preaching against the sins of the last government.
–VDW 11 May 1917

It isn’t clear from press accounts whether the bill was amended to grant the city clear title or whether the 99-year lease arrangement was left in the legislation. But it hardly seems to matter, today. I cannot believe any provincial government would snatch the property back from the city. (And, in any case, the 99-year term passed a couple of years back with no mention by the Province of having a go at ‘our’ Square, as far as I know).¹

Getting from Square to Cenotaph

Once the debate over whether the City owned the former courthouse property was over, there was still the question of what the site would be called and what sort of memorial would be erected to honour ‘our boys’.

The name of the site was settled by Council in 1919. Initially, the park was to be called “Memorial Square”, but that was thrown out (one person described it as being lugubrious) in favour of “Victory Square”. Work went ahead (under the city’s Parks Commission²) on the Square’s garden and sidewalk features. The park itself was viewed as something separate from, although related to, the war memorial. Multiple city sub-committees were tasked with sorting out which of several proposals for a war memorial would be implemented.

The possibilities included the following ideas (these ideas were for placement in Victory Square; not all memorial proposals were to be located there; one proposal, for example, was for a memorial to be on a boulevard in the middle of Georgia street! (VDW 8 March 1922)):

By the end of 1922, the decision was made to go with a simple cenotaph in the northeast corner of Victory Square. This would be costly enough, as it turned out (I cannot imagine the cost of the tower with chapel and chimes!). It was budgeted at $8,000, funds for which would be privately raised. The Canadian Club gave oversight to the Cenotaph project (VDW 23 January 1924).

Victory Square was opened, with its cenotaph, in 1924.

¹Perhaps I shouldn’t be so confident. This imaginary, futuristic press report (datelined May 5, 2016) appeared in the Vancouver Daily World on May 7, 1917:
“Victoria, B. C., May 5  —  A large delegation from Vancouver, headed by the mayor of that city met the provincial executive today to urge that a renewal of the lease of Memorial Square be granted to the city. The lease was originally granted nearly 99 years ago, and expires in the course of a few weeks. The ground was then known as the Old Court House site, but it is not now known how it attained that name. The delegation urged that this was the only open space on Hastings street from the Post Office to the Burnaby cemetery, and that the whole intervening district was closely built up. It would be a calamity if, as had been suggested, the Soldiers’ Memorial were removed and the site sold for commercial purposes. Premier Wowsir said in fairness to the rest of the province the site ought to be sold. Its value was estimated at $25,00,000. He would, however, be willing to let Vancouver have it for $23,000,000 payable in the city’s debentures at 4 per cent. The delegation withdrew very much disappointed. Interviewed afterwards, his worship, the mayor, said that as a general election would be held in a few months and as there seemed a general disposition to return a new government in view of the fact that the present administration had been in power 32 years, he thought no further action would be taken until it was found possible to make representations to Mr. Wowsir’s successor.”

²While the Parks Commission was apparently responsible for implementation, the planning of the Square was done by the architectural firm of Sharp & Thompson (VDW 23 January 1924).