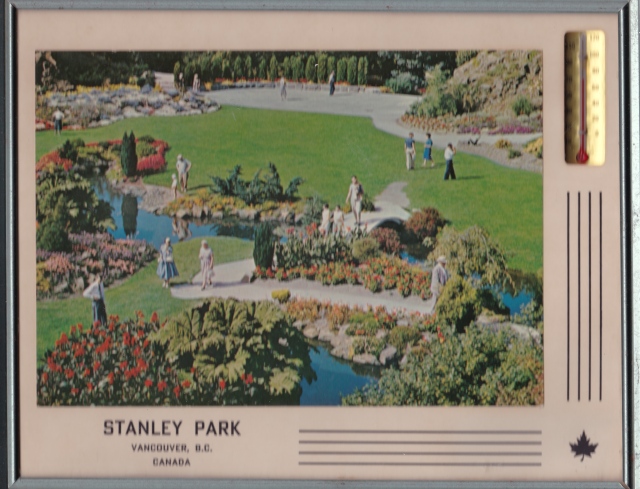 “Stanley Park” ca1960s. Author’s Collection. In fact, it shows part of the garden of Queen Elizabeth Park on Little Mountain in Vancouver. QEP is a former quarry. It was named in honour of Queen Elizabeth II’s mother, aka the Queen Mother, in 1939. (A tip-off that this may be QEP was the presence of the Gunnera (the enormous leafy plant in the centre foreground). Gunerras still can be found in QEP.

I purchased the framed image above (complete with functioning thermometer!) at an antique shop when I was in Lethbridge, AB, recently.

The label of “Stanley Park” on the photo bothered me from the outset. But I bought it anyway (for $5) since Stanley Park has changed a lot over its history and I don’t pretend to be an expert on past developments in the Park.

A collector and friend, Neil Whaley, suggested that the image might be of Butchart Gardens on Vancouver Island. But upon looking at older images of Butchart, I didn’t see any water features similar to those that appear in my image.

So I focused on Queen Elizabeth Park on Little Mountain in Vancouver.

The undated VPL postcard shown above seems to be a pretty close match with my Lethbridge acquisition.

For a different angle on the park, see this ‘60s CBC Vancouver “Morning Show” documentary starting at about the 18 minutes, 50 seconds mark. Those of you who mourn the death of the Social Credit party perhaps might enjoy the interview with Vancouver Parks Board commissioner, Grace McCarthy. (Those of you who aren’t fans of McCarthy might still ‘enjoy’ listening to her already practiced political natter in response to Ross Mortimer’s questions). I found myself smiling during this documentary. There is a remarkable contrast between the slow-moving, detailed (and very well-spoken, Brit-influenced language from Mortimer; I think the last of these less-than-photogenic but well-spoken male hosts was Norm Perry, formerly of Canada AM) and today’s very fast-moving and less grammatically-conscious docs.

10 Responses to 500th Post: A Case of Mistaken Identity