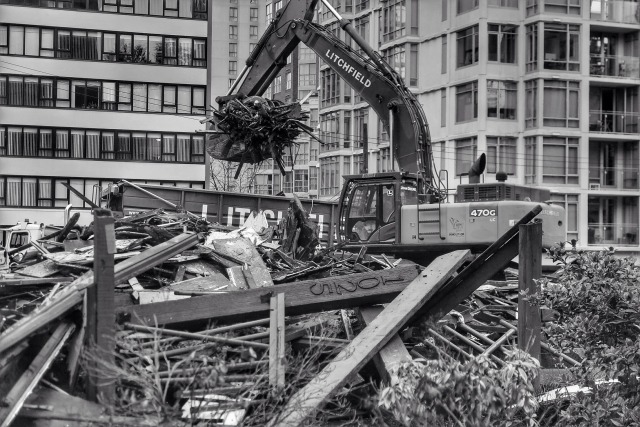 “In a hole in the ground there lived a hobbit. Not a nasty, dirty, wet hole, filled with the ends of worms and an oozy smell, nor yet a dry, bare, sandy hole with nothing in it to sit down on or to eat: it was a hobbit-hold, and that means comfort.”

Hobbit House at 1025 Nelson Street (just west of Burrard), was demolished by First Baptist Church during the first week of December, 2018, as part of the church’s plan to build a 57-storey residential tower on the site. October 2018. Author’s photo.

Hobbit House (1972-2018) is actually considerably older than 46 years. It was built as a residence much earlier¹ and, until it was transformed into Hobbit House (1025 Nelson), served as a rooming house. It became a coffee house ministry of First Baptist Church in 1972. It hasn’t had its coffee house function for a number of years and it has a date with the wrecker probably before the end of 2018 as part of First Baptist’s redevelopment plans to place an enormous residential tower on the property in the next few years.

Hobbit House was the brain child of Rev. “Padre” J. Willox Duncan (then, Visitation Minister and later Minister Emeritus until his death in 2002) and Rev. Roy Bell (Senior Minister, 1970-1981). The church budgeted $24,000 for the refit of the old residence.

When Hobbit opened in 1972, 40 volunteer staff were trained by Bell. Programming included film presentations (Monday nights), tea times (Thursday afternoons), handicapped gatherings (Wednesdays), and youth gatherings (Friday/Saturday nights). By 1974, there were, on average, 400 people/week coming through Hobbit’s doors and there were more than 60 committed volunteers. A Sunday lunch was added that year; that would remain a feature of Hobbit’s programming for much of of its remaining ministry life. 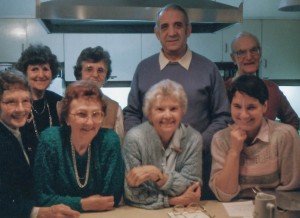 Some of the “Tuesday Lunch Bunch”, volunteers who would prepare the soup/sandwiches for whoever showed up. These volunteers, as I recall, were always smiley and friendly and became good friends among themselves, as well, I’m told. Photo courtesy Linda Zlotnik. n.d.

As he was preparing to leave FBC and Hobbit leadership in 1988 (to accept a ministry call at Kitsilano Christian Community Church), Rev. Jeremy Bell described Hobbit as “the church’s living room” into which the West End community was invited.

The number of people using Hobbit continued to drop in the ’90s, as did the number of volunteers. At the same time, the ministry became more institutionalized and, as a result, less volunteer-driven. 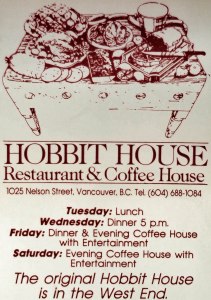 Finally, in 2002, the Hobbit ‘Director’ position was changed to FBC’s ‘Hospitality Coordinator’ and in 2005, two of the longest-standing Hobbit programs were dropped: the Sunday lunch and Friday dinner.

Hobbit House continued to be a viable location of ministry activities for a few years after 2005, but it was no longer FBC’s “living room”. It was more like the church’s “basement” — a place where the family could meet, but not a place into which you’d invite the neighbours on a regular basis.

Before the end of 2018, Hobbit House – together with the church’s two rental properties, one on either side of Hobbit, plus the Youth House² – are expected to be demolished to make way for the residential tower which the church has decided will be built on the lots west of the church building.

“If more of us valued food and cheer and song above hoarded gold, it would be a merrier world.”

¹Interestingly, there is no record of 1025 Nelson Street in the online Historical Vancouver Building Permits database. This may be due to the fact that the online records begin in 1901. There is evidence in the 1898 city directory that 1025 Nelson Street was extant in that year. I was briefly excited to see that an early resident of 1025 was Norman Caple (a notable early Vancouver photographer). I was pretty sure that I’d seen a photo of the Caple family in front of their home. But upon checking CVA (and VPL and the Royal BC Museum), I saw that the family image I recalled was at one of their earlier homes (on Hamilton Street).

²The rental property to the west of Hobbit is today known as The Rivendell (1045 Nelson); this is a 1954-built 3-storey walk-up apartment block of which so many could be found in Vancouver at one time. The Rivendell was known as Geneva Apartments at the time it was purchased by FBC ca.1998. The church has owned 1021/23 since 1988.

Well before my day, there were also homes, presumably resembling 1021/23, on the lots where the FBC and YMCA parking lots are today; these were at 1011, 1015, 1017, and 1019 (the church structure itself was at 1009 Nelson until the 1930s, I believe, when the address was changed to 969 Burrard, instead). When these lots were purchased by the church isn’t clear (with the exception of 1011 Nelson, which was bought in 1956). The church maintained a manse at 1017 Nelson in the earliest years of the new church building (Nelson and Burrard). This home housed only one pastor as far as I know: Rev. Dr. H(enry) Francis Perry (July 1909-February 1915). (There were other church-owned residences for FBC ministers, I’m certain, but that subject will have to await its own future post.

3 Responses to First Baptist’s “Living Room” to be Demolished