The three images featured in this post of the 700 block of Seymour Street are among the finest available of the block from CVA online. Professional photographer, Don Coltman, was commissioned to make the images for Shell Oil, Co. in 1947.¹ Not only are the images of high quality technically, but subject-wise they were made at a point in time when the block was at its prime — before it ceased to be a stroll-worthy downtown block of retail shops and became a less friendly block of non-human-scale buildings. 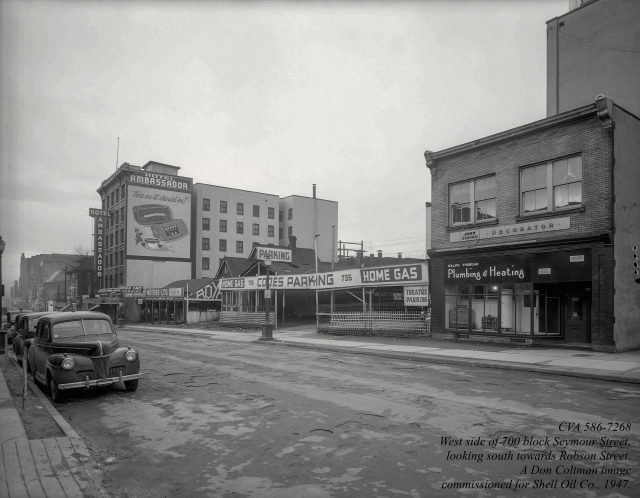 The Strand Theatre (earlier known as the Allen Theatre when it was built in 1920) was demolished, as was Birk’s building (visible from Seymour, but actually fronting on Granville) in 1974. These buildings would be replaced by the initial instalment of Vancouver Centre Mall and Scotia Tower (1974- ). The earlier occupant of the SW corner of Seymour at Georgia (1891-1920) was the Waverly Hotel (owned by the Queen brothers, who also ran the livery stable there).

John Girvan was proprietor of the Arts and Crafts Studio, an interior decorating concern that appeared on the block by the mid-’30s. Girvan was a member of the Royal Scottish Society of the Arts and of the Incorporated Institute of British Decorators. Girvan’s firm did the redecorating of the interior and exterior of Capitol Theatre in 1929; they also re-did the interior of Holy Rosary Cathedral in 1951.

There was also a plumber and electrician in the block.

According to the 1947 city directory, there was another occupant of 721 Seymour that year: a group hitherto unknown to me called the Legion of Frontiersmen. This was a voluntary paramilitary group dedicated to the defence of Britain; it was started in 1905 by former RNWMP constable, Roger Pocock, and has had its ups and downs since then (most of the ‘ups’, not surprisingly, came during the two world wars). It is still functioning today under the patronage of Edwina, Countess Mountbatten. Interestingly, one of the officers of the Legion during WWII was John Girvan. He may have been the Legion’s Vancouver landlord.

The two single-storey parking facilities just south of Girvan Arts & Crafts Studios seem to have been ‘parking lots’ but only secondarily. Principally, the two seem to have been used car lots (possibly serving as an overflow lot of Blackburn’s on Seymour’s 800 block.

In addition To being called “Royal Parking”, that lot was known variously over the years as “Burrard Motors Ltd.”, “Seymour Auto Sales”, and “Hav-A-Car”. The auto sales component of these two lots seemed to peter out by the early 1950s. About this time, a “Rite Park” lot was established there. This lot apparently made its money exclusively from charging for parking. It may be that this was the four-storey concrete parking lot which was at this site until recently (see photo below), when construction crews demolished it and began to dig for the establishment, by 2021 it is claimed, of the second instalment of the Vancouver Centre Mall and office tower adjacent to the Scotia Tower. VCII, as it will be known, will have a footprint extending from Scotia as far south as Vancouver House (605 Robson), about which more below.

In 1947, this building was known as the Ambassador Hotel. However, it was called the Lolomi Hotel upon its construction in 1913 and was later known as the Hudson Hotel. The Ambassador lasted through Expo ’86, but not long after, I gather. It was demolished to help make way for an office building known as “Vancouver House“, completed in 1989, at the NW corner (605) of Robson at Seymour.

Although Orillia Rooms faced onto Robson rather than 700 block Seymour, strictly speaking, it was no less part of the block (not unlike Strand Theatre). The Orillia was a mixed-use commercial/residential block over which much ink has been spilled, including on VAIW. I won’t add more here. 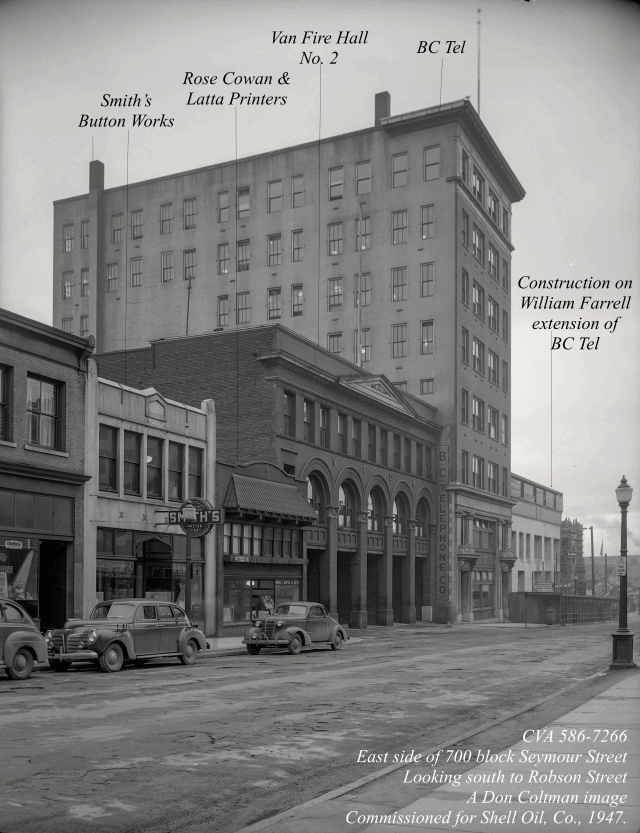 Crop of CVA 586-7266. My buddy, Wes, has identified the vehicle directly in front of Rose Cowan & Latta as a ’38 Chevy Master Deluxe Coupe.

All of the east side of 700 Seymour was swallowed by the enormous development of BC Telephone Co. (now Telus) in the late ’60s or early ’70s, I believe. Most of the properties from the Fire Hall north to Georgia were consumed by BC Tel. (Telus has since then taken BC Tel’s property-munching ways to the extreme by developing the block into TelusGarden).

As we did with the west side, we will begin at the north end (not all properties of which are visible in Coltman’s photo) and work our way south to Robson.

At the SE corner of Seymour and Georgia in 1947 was a medical clinic; it was within the Publicity Building. By the early ’50s, however, the physicians who’d worked in this clinic abandoned the space for, presumably, cushier digs at the NE corner of Broadway at Fir.

CVA 69-21.07 – SE Corner of Seymour at Georgia looking south down Seymour towards Robson. 1972-74. Ernie Fladell photo. The Publicity Building which housed the medical clinic in 1947 is still visible in this early ’70s image… but not for much longer.

The garage at 714 Seymour, known in the late ’20s as Strand Garage, came to be Finch’s Garage, Urwin Finch proprietor, by the mid-1930s and remained so until 1950 upon Urwin’s death that year.

The Quadra Club has been elsewhere discussed on VAIW. The club was at the Seymour site from ca1942 until the early ’70s, when it wrapped up operations. Before the Quadra Club moved into this space, however, there were a couple of tenants who were arguably of a quirkier variety.

In 1940, a group known as Technocracy, Inc. moved in. They had been around Vancouver at least since the mid-’30s. But that year the federal government outlawed them and in this province, the BC Provincial Police enforced the action. So much for that lease.

Hard on the heels of Technocracy Inc. came the Christian Church of Spiritual Light. This bunch was affiliated with the National Spiritualist Association of Canada. I expect that they would have presented a comfortable pew for then-Prime Minister William Lyon Mackenzie King! This group lasted just a couple of years; they were gone from 724 Seymour by 1942. 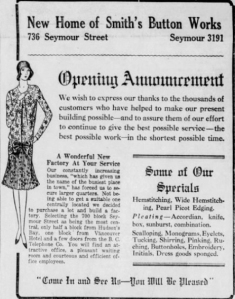 This tailoring shop had a long life on Granville Street from ca1917-1929. They moved to 736 Seymour in 1929, presumably because rental rates had escalated to unbearable levels for proprietor, Alex S. Smith to retain his business on the main drag.

His business seemed to retain custom at the new location as his shop remained in business from 1929 through 1947 when the Coltmam photo was made and as late as 1963. Alex Smith died in 1964.

In 1963, the Inquisition Cafe moved into 736 Seymour, for a matter of months.

This printing company was a partnership of Robert R. Rose, John B. Cowan and Robert P. Latta. The firm began as R. P. Latta & Co. at 500 Beatty (ca1910-ca1920) and became a partnership at 748 Seymour ca1923. In 1956, BC Telephone Co. bought their property for future expansion. The business moved to Strathcona.

Fire Hall No. 2 originally was built in 1888 a little bit north of this location – at 724 Seymour (roughly where the Quadra Club was by 1947), but this structure came down in 1903. In 1904, the building at this location was established. In 1951, the City offered the Fire Hall for sale and (surprise, surprise) BC Telephone Co. bought it for future expansion,

The 8-storey structure adjacent to the Fire Hall was BC Tel’s existing office block. It was built in 1919. Adjacent to it (on the NE corner of Robson and Seymour) was the construction site of what would become known as BC Tel’s William Farrell Building. The Farrell block still stands; it is scarcely recognizable, however, as it was covered in a glass ‘skin’ a few years ago.

One of the original homes in this part of the east side of 700 Seymour was the Australia Boarding House, a boarder at which Aussie import and much-appreciated local pro photographer, Stuart Thomson, laid his head upon first arriving in Vancouver. 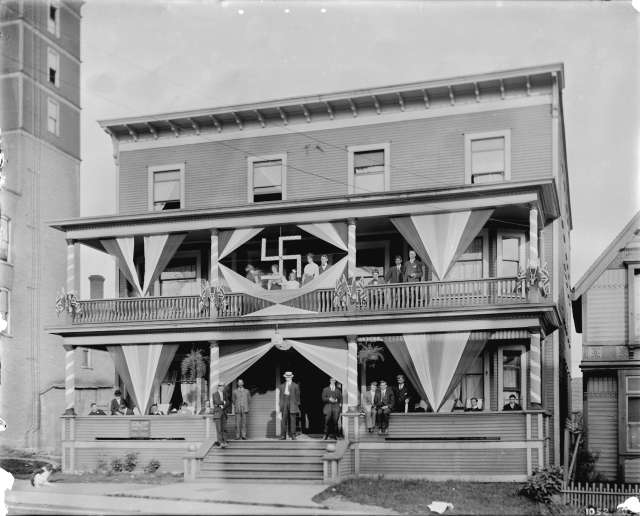 ¹It isn’t clear to me why Shell commissioned these images of Seymour. As far as I know, they didn’t own any property on this block. Perhaps they were considering buying property along here. The only connection I can come up with is that Shell mounted their logo atop the Vancouver Block in the ’50s. But that seems to me like a stretch as a motive to commission photos of the block behind that building. (It is a pity that these three Seymour Street images aren’t ‘keyworded’ as such by CVA. They turn up during a search for Shell Oil, but not when searching for Seymour Street).