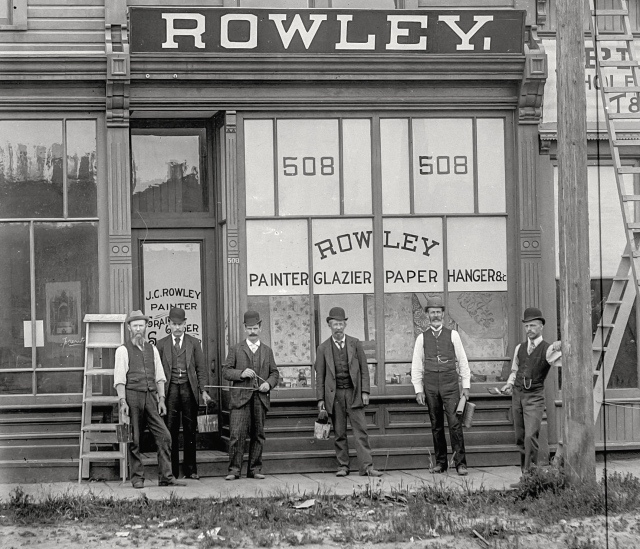 Crop of CVA – SGN 68 – Men standing with paint buckets and brushes outside J.C. Rowley Painter and Decorator, 508 West Pender Street. ca 1894. It isn’t clear to me which of these gents was Rowley (but if pressed, I’d say it was the gent third from left).

John Capper Rowley (1844-1941) was a real character who was a resident in Vancouver during its pioneering period! Born in Staffordshire, England, he was the son of a coach shop owner. He began a lifetime of wandering when in 1861 he left Staffordshire for London to find work as a house painter in and around the capital (his occupation, in a couple of records, is shown as painter and plumber, but I’ve seen no evidence to confirm that he ever practiced plumbing professionally).¹ A decade later, when he was about 27, he seems to have married Caroline.²

‘A Wandering Painter, He…’

In 1873, Rowley’s wandering spirit was given free reign when he and his wife boarded the Wild Duck, bound for New Zealand. Nearly 4 months after leaving England, they disembarked at Wellington, NZ. Rowley found work, not least winning a contract to paint the then-new ‘Old Government Buildings‘ in Wellington, then and now the ‘largest wooden building in the southern hemisphere’.

In 1876, Rowley spent some time in Australia (Melbourne and Tasmania), although it isn’t clear whether his wife accompanied him on this less ambitious journey or remained in Wellington. Sometime after his Australian venture, he planned to return to England, but ended up in Cape Town, South Africa where presumably he found painting work aplenty.  By 1881, he had returned to NZ, settling in what today is described as a ‘village of Auckland’, Devonport.

He left NZ again in 1887, in search of a better economic situation than was then present in his adoptive nation. This time, he set off for the west coast of British North America, to the freshly minted city of Vancouver.

The first mention of Rowley in the local press was in an ad placed by him in December 1888 seeking staff for his painting business. “None but good hands need apply,” it said, and was signed “J. C. Rowley, Hastings” (Daily World, 20 Dec 1888).³ There is evidence in B.C. provincial government records of the same year that Rowley did work on new school buildings in the city. By 1890, his painting business appears to have been headquartered at 104 Hamilton, near Hastings, close to what would become the city’s heart.

In 1893, Rowley moved his Vancouver business to the location shown in the photo above, at 508 Pender. His business remained there, as far as I can tell, until 1894. In that year, he was a sub-contractor on the job of painting (presumably) the Inns of Court building nearby his former business site at SW corner of Hamilton and Hastings. Also in that year, BC government records show that he billed the Province for $9,300+ (well in excess of $200,000 in today’s dollars) for work he did on the then-new Parliament Buildings in Victoria. By 1895, Rowley was living on Pacific near Burrard. 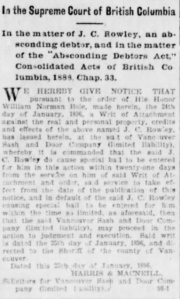 On January 25, 1896, a legal notice appeared in the Daily World. The notice declared that the Hon. William Norman Bole of the Supreme Court of B.C. had found J. C. Rowley to be “an absconding debtor”. The creditor who had pushed for Rowley to be so identified was Vancouver Sash and Door Co. (located at north end of Granville St. Bridge).

The Absconding Debtors Act was legislation which provided a way for creditors to lay hands, legally, upon a debtor’s property remaining in the province after he’d left with debt unpaid. In the case of Rowley, he’d not only left the province, but the country and it seems doubtful, to me, that the owners of Vancouver Sash and Door ever got the satisfaction of laying hands on the debt Rowley owed them. I don’t know which ship he boarded, but Rowley made his way back to New Zealand. He picked up the house painting business again there. He lived in various suburbs of Auckland after retiring in 1902 and died there in 1941.

¹Many thanks to Robert of the WestEndVancouver blog for his generous research assistance with this post — especially with Rowley’s life in New Zealand.

²Whether JCR married one woman named Caroline or two remains an open question. Rowley seems to have married a woman called Caroline (pre-married surname is unknown) in 1871 and Rowley evidently boarded the Wild Duck with a woman identified as “Caroline J. Rowley” in 1873. But there is also evidence of him marrying someone identified as “Caroline Makepeace Rowley” in 1903. Caroline Makepeace died on May 5, 1927. It could be that the woman who boarded the Wild Duck with Rowley was his wife in all but the legal details and that he delayed “making an honest woman of her” until 1903. Or there could have been two wives and either he and his first wife parted company, or she died and he married someone of the same first name in 1903.

On a related note, Rowley, in a published profile of his life in the New Zealand press, claimed that he “has no descendants”. But there is evidence that that may have been a porky. In 1894, one Louisa Swindell published a request in Reynolds’s newspaper seeking information on her father, J. C. Rowley, “house painter and plumber” who left Staffordshire in 1871. (Reynolds’s Newspaper, 3 June 1894).

³Hastings at the time was described in the 1888 Williams Directory as “situate on the south side of the Inlet, three miles from Vancouver by a good road, and is connected with New Westminster and Vancouver by the C. P. Railway. It is the ‘Brighton’ of the Mainland and the fashionable resort for visitors especially during the sumer months. The ‘Brighton’ Hotel is one of the best and most popular hotels on the Mainland.” Whether Hastings townsite was ever considered a ‘fashionable resort’ seems to me to be open to question.