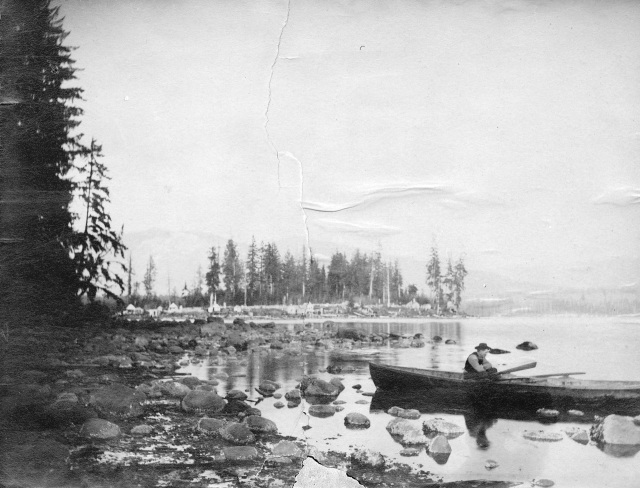 This photograph (CVA Wat P38) was the work of Lauchlan A. Hamilton. In my judgement, it is one of the most attractive early images available from the digital collection of the City of Vancouver Archives (CVA).

Mr Hamilton lived in Vancouver for fewer than five years, but those years were important, as was his contribution. He was Canadian Pacific Railway (CPR) land commissioner during a period in which the CPR had a lot of authority and he became one of the first aldermen of Vancouver’s Council. As land commissioner, he surveyed and named Vancouver streets in the central business district and the West End (including, immodestly, Hamilton Street). 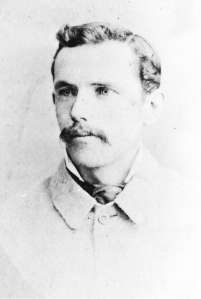 Where was Mr Hamilton standing when he made this image, vis-a-vis today’s Vancouver? If you walk behind the Vancouver Convention Centre to the seaplane terminal at the far western end of the pedestrian walkway and look toward Brockton Point at Stanley Park, you are probably as close as you can get today (without getting wet).

There were some surprises for me in this image of Brockton Point. The first was that it is attributed to Mr Hamilton. This is one of only two digital photos in the CVA collection (other than a couple of family snapshots) that are attributed to him. I believe he made several drawings and watercolours that are in the CVA’s non-digital collection. So he was an amateur artist, evidently, but not a recognized amateur photographer. There are a good many un-attributed photographs in CVA’s digital collection from the period that Mr Hamilton lived in Vancouver, however. So who knows how many of those ought rightly to be attributed to him?

Another surprise was that there were so few mature trees in what would become Stanley Park (in 1888). I shouldn’t have been surprised by this, however, as it is well known that in the pre-Park years (1860s-1880s), it was logged aggressively.

There also appears to be evidence of settlement of some sort in what would become the Park. It is pretty far in the background and so is quite fuzzy, but there appear to be temporary (tent-like?) structures along the shore. I believe a military reserve was established there during the 1860s, and there was likely still some native settlement there in the 1880s.

Hamilton managed to convey with his camera a scene that might very well have been painted. And the age of the image (nearly 130 years, now) has done the image a favour; with the passing of time, the emulsion near the surface of the photo has begun to break down a bit, thereby creating what would be referred to in complimentary terms, in antique painting circles, as a “crackle finish”.