Lest We Impress: Georgia Medical-Dental Building

CVA 99-3749 – Georgia Medical Dental Building at Northwest Corner Georgia at Hornby. 1929. Stuart Thomson photo. (Note: The angle from which this image was taken makes the  ground level on the right side of the wooden construction zone fence appear to be lower than the street on the left side. But it isn’t. Photographer Thomson was probably inside the construction barrier of the 3rd Hotel Vancouver shooting from near the top of the fence line; Thomson was the official photographer of the hotel’s construction.)

It is all too easy to impress the present onto the past. Especially in cases where there has been an attempt made by contemporary architects to ‘nod’ to a prior building that once occupied a lot (which I consider praise-worthy). A good example of this is the Georgia Medical-Dental Building (MDB, hereafter; 1929; McCarter & Nairne, architects), which was demolished by implosion in 1989, and the Shaw Tower at Cathedral Place (SCP, hereafter; 1991; Merrick, architect), which stands on the lot today.

When I recently happened upon the image above, I was initially disturbed by the apparent narrowness of the old MDB. It appeared to me to be only half as wide as it ought to be.

At first, I thought that perhaps when work started on the structure, the economic downturn of the Great Depression forced the builder to focus on building just the southern slice; that the northern half would be built later to create the square footprint that I assumed was ‘natural’ for the structure.

But that was not the case.

The next image revealed my error: MDB had an ‘L’ footprint, not the square one that I’d assumed it had. My assumption was due, in part at least, to my expectation that the older building would have had the same sort of footprint as today’s SCP has. 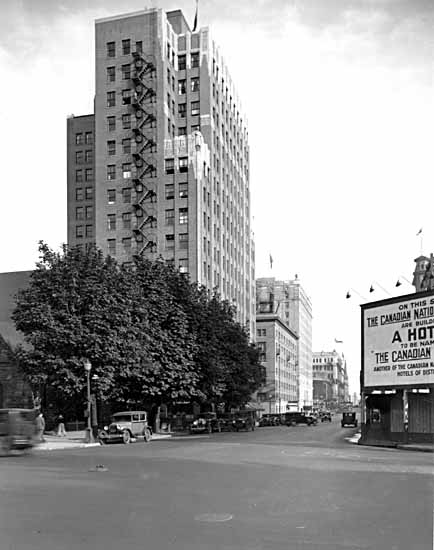 VPL 12176 View looking east at the Georgia Medical-Dental Building from Burrard Street; this reveals that the structure had an “L” footprint, not a square one. 1930. Frank Leonard photo.

Features in Common and Differences

There was an attempt made by the architect of SCP (Paul Merrick, 1991) to replicate some features of the Medical-Dental building. Common features include:

There are many more differences between the past and present occupants of the northwest corner of Georgia at Hornby than there are commonalities:

A griffin and other ornaments (including a rain diverter) on Shaw Tower at Cathedral Place (taken from Hotel Vancouver). c2013. Author’s photo.

6 Responses to Lest We Impress: Georgia Medical-Dental Building