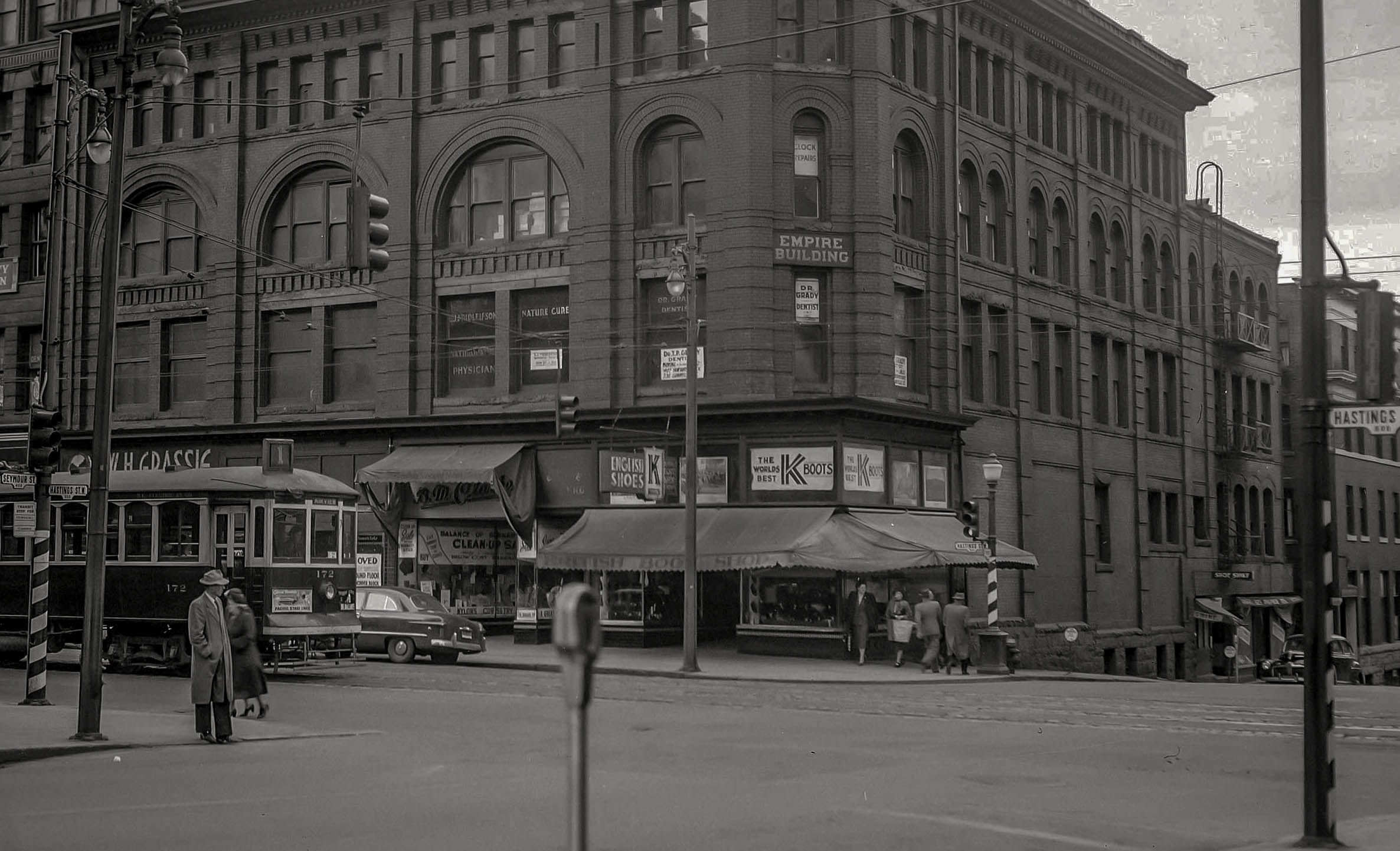 The Empire Building (C. O. Wickenden, architect) was located at the NW corner of Hastings at Seymour from 1889 until the late 1970s. It was initially known as the LeFevre Block, as the structure was built for CPR physician, Dr. James R. LeFevre.

A question which often arises in my mind with such structures is “Who were the tenants who occupied it?” It seems to me that the type of tenants (e.g., lawyers, realtors, doctors, accountants) must surely have created a certain sort of building; a certain sort of atmosphere within.

So I dug into Vancouver directories. Most of the early directories in the pre-privacy-obsessed world of the millennial age helpfully showed not only the name and first initial of the occupants of buildings, but also their occupation. If there was no gender/marital designation (e.g., Miss or Mrs), it was safe to assume that the occupant shown was male (although, whether the person was a bachelor or married was left to the reader’s imagination).

I was curious whether the dominant occupations of tenants in the building remained roughly static or varied over time.  Therefore, I divided the Empire’s past into two periods: Early (1891-1933) and later (1934-1954).¹

In the early years of the LeFevre Building (as it evidently was known until about 1897) it wasn’t as easy as it became a little later to determine the occupations of those who were tenants; the Vancouver directory did not consistently show occupations in the earliest years. However, some could be deduced. For example, Dr. LeFevre and his physician partner, Dr. Octavius Weld, had offices in the building.  Likewise the architect of the block, C. O. Wickenden, the B. C. Chamber of Mines, the Vancouver Board of Trade, and the New Westminster & Burrard Inlet Telephone Co., Ltd. (which by  the mid-1890s apparently became the B.C. Telephone Co.) rented space there.

What became evident pretty quickly is that the nature of the tenants in LeFevre/Empire changed considerably between the 1890s and the 1920s and ’30s.² In short, it went from being a block that catered primarily to professions and services to one that was dominated by music-related businesses (e.g. teachers, drama schools, elocutionists, and dancing studios). If pressed, I’d say that the single most common occupation in the Empire in the 1920s and ’30s was the music teacher. 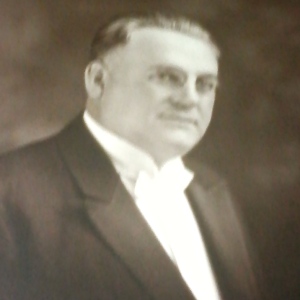 Haines was born in England and was a musician, and saw himself as such from his teens onward. He was sent to a school of music in London by his parents at age 12; he graduated at age 18. His instrument was the piano. For the first couple of years after completing his studies, he was pianist to a tenor who spent much of that time touring Europe. Apparently, the pianist and tenor had a major disagreement over something (just what was the subject of their disagreement is long ago forgotten) so Haines quit that job and returned to England.

Shortly after, Haines fell in love with a lady called Alice Alexander. The two ultimately became engaged to marry. But Alice left Frank at the altar – quite literally. Naturally, Frank was angry and heartbroken by this and he left England for the New World, vowing never to return to England.³

It isn’t clear just what Haines was occupied doing when he first came to Canada. There is some evidence in Alberta records that he homesteaded near Medicine Hat in 1910. There are unsubstantiated family tales about him working in the U.S. and Canada.  He spent some of the war years in the Canadian forces. He was injured in an automobile accident in France and was subsequently discharged. In 1917, there is evidence that he was conducting Winnipeg’s Imperial Theatre Orchestra (which, in later years, became the Majestic and, later still, the Rialto). Whether he remained in Winnipeg during the ’20s or was elsewhere, isn’t clear. But it is plain from the Vancouver directory that in 1931, he had ‘gone west’ and was living in Vancouver at 905 Davie; and he had a studio in Room 211 of the Empire Building.

Frank married Nancy Marshall in 1932. In 1935, they welcomed their daughter, Nancy Haines, into the family.

Nancy spent several early years (approximately age 5 to 8) in the Empire Building. Part of the time during those years was spent in her father’s studioº (either for her Saturday morning piano lesson or at her Dad’s ‘music evenings’ when his students would perform and she would attend – sleeping on someone’s lap, more often than not – to save the cost of a babysitter); part was spent in elocution training with a ‘Mrs. Thompson’.

Nancy describes the Haines studio: He had an “upright piano shoved against the far wall. The studio would hold four or five people in a pinch. No desk. And he had a key to the common bathroom on that floor. There was a radiant electric heater on the floor of my Father’s studio in the winter; I remember the bright red filament glowing and reflecting on the curved metal case on the back. I also remember a single large pull-up window that looked out on the ‘well’ between the Empire’s wings. Dad didn’t have a street view from his studio.”

She also has described some of the sights, sounds, and odours of the building, in general:

From the Hastings entrance, there were stairs up from the street to the 2nd floor — the hallway at the top went straight north to the other end of the building AND to the west – with  studios along both hallways on both sides. The ceilings were high (I recall pipes running along the tops of them), causing sounds to be sort of lost up there. There was a glass panel in the upper part of each of the studio doors. The panels were not transparent; you could see light and movement through the glass,  but no clear image of anything or anybody. There was lettering on the glass. The floor in the building creaked a lot — so much so that I can still ‘hear’ it in my memory. There was a ‘walking’ runner down the middle of the wooden floors in the hallways. The Empire elevator was at the north end of the building. The stairs wound around the black iron cage that housed the clanking elevator and cables.

The smell of the building was ‘old’; it was similar to the smell of a building I would later spend time in — that of Lord Roberts School (I believe the janitors oiled the wooden floors in the hallways to prevent them drying out).

You could hear ‘hollow’ sounds emanating from the studios – a cough, a piano playing, a singing voice – as you walked past them. I can’t imagine – with all the sounds I heard every Saturday for 3+ years – that there was anything resembling sound-proofing in the Empire. The Empire was a busy ‘people’ building, with long-remembered sights, smells and sounds that are dear to this old lady.

The Empire was demolished in 1980. In about 1985, it was replaced with a glassed-in, circular public structure as part of the Grant Thornton complex (adjacent and to the north), which was located where the St. Francis Hotel once was. The structure isn’t long for this world, however. The corner is due for redevelopment along the same lines as the NE corner of Georgia and Howe: more retail space will be the result.

NW Corner of Seymour and Hastings where the Empire Block once stood. 2017. mdm photo. In the Summer of 2018, this public meeting place in turn was destroyed, sadly, to make way for additional commercial space.

¹I didn’t take the research beyond the mid-1950s as I didn’t have access to Vancouver directories beyond that period. At the time this research was underway, the Special Collections department of VPL (where post-1950s directories are held) was closed for construction.

²In 1942, John Goss had space at the Empire, apparently prior to establishing himself and his studio on Granville Street. And for the better part of the 1920s-1940s, Miss M. P. and Miss B. Cave-Brown-Cave hung their music teaching shingle at the Empire.

³ As is often the case with things we vow never to do, he did return to England on at least two occasions: in 1915 when he was hospitalized due to a wartime injury; and for a visit in 1922.

ºI’m delighted to report that a photo of an interior of a music studio in the Empire is available in SFU’s Digitized Collection here. It shows the studio of Dr. Albert Gittins, whose studio was on the same floor as — and looked quite similar to that of — Frank Haines’ studio, according to Haines’ daughter, Nancy.

13 Responses to The Empire Building