The Lesters and their Dance Schools/Halls

CVA 789-74 – Looking west on Davie at Granville after a heavy snowfall. The M. Lester Dancing Academy is advertised on the Davie side of the building, although by the time this image was made, it had almost certainly moved into its new digs at Davie near Burrard. 1916.

There isn’t a lot known about the proprietress of M. Lester Dancing Academy. Maud was an Ontario girl (although exactly where in Ontario she was born and raised or what her maiden name was isn’t clear to me). At some point, she married American Frederick W. Lester and in 1898 in Detroit, they had their only child, Dorothy.* How Frederick and/or Maud earned their daily bread while they were in Detroit isn’t clear, either. Indeed, it is clear only that they didn’t tarry there for long.

As the century turned, they set out for Victoria, BC.

Frederick found work as a clerk in Victoria’s Driard Hotel  (facade extant). Their residence during their time in Victoria was, interestingly, at 52 Michigan Street (an homage to their earlier home?)

She leased the hall of the AOUW (Ancient Order of United Workmen). The following appeared in the Victoria Daily Colonist on October 31, 1904:

Mrs. Lester’s Dancing Academy – A very enjoyable time was spent at A.O.U.W. Hall Saturday night. The occasion was a grand Cinderella dance given by Mrs. Lester to the members of her Friday night class and their friends. About forty couples tripped the light fantastic over a beautifully conditioned floor to the music supplied by Miss Heater who presided at the pianoforte. Among the young ladies who joined in the various sets were many in their ‘teens, pupils of Mrs. Lester, and their ease of movement and the grace with which they went through the various complicated figures of dances, showing unmistakable evidence of careful training. The main hall of the A.O.U.W. building has undergone a complete metamorphosis since it has been leased by Mrs. Lester for her classes. Gay bunting is tastefully festooned overhead, the side lights are shielded in delicate and effective tints, while the “cosy corners” are neatly and comfortably furnished and draped with Oriental textures. There is ample seating accommodation, abundant floor space, and a happy temperature which is always maintained. The supper room is a model of neatness, as indeed is the whole arrangement. This is the third season Mrs. Lester conducts these dancing classes, and the success which is attending them is proof of their great popularity.

Maud’s dance lessons weren’t held exclusively at the AOUW Hall during their time in Victoria. There was also a period during which the Academy called the Alexandra Royal College ‘home’ (on Government Street, “opposite the new post office”). As well, “parties desiring instructions at their own homes may be accommodated.”

The Lesters pulled up Victoria stakes by about 1908 and headed across the Strait of Georgia to Vancouver. By 1909, the M. Lester Dancing Academy had hung its shingle on an upper floor of the chemist’s shop at the southwest corner of Davie and Granville (1205 Granville). The Lesters also lived in the building. They didn’t own the building, however. The owner, certainly by 1913 if not before, was local architectural luminary, Thomas Fee.

In the 1909-12 editions of Vancouver Directories, Frederick described his occupation as “Dancing Master”. In the 1909-10 editions, “M. Lester” didn’t get mentioned; and in the 1911 edition, while Mrs. M. Lester received her own listing, she didn’t rate a professional designation. Just before moving out of their Granville location in 1913, however, there had been a remarkable even-ing of self-described designations: both Frederick and Maud were described as “Dancing Teachers”.

In addition to the Dance Academy, the Lesters supplemented income from the business by sub-letting the space to groups that were looking for a hall in which to hold a dance. Thus, the 1205 Granville property was known not only as M. Lester Dance Academy, but also as “Lester Hall”.

Sometime in 1914 or 1915, the Lesters’ new professional and residential location (designed by Thomas Hooper) on Davie near Burrard, was ready for them to move into.

They chose to call the dance school in its new location what it had always been called. But the dance hall would no longer be “Lester Hall”; it would be called “Lester Court”. What was the reason for the name change? It was probably partly to distinguish the Burrard Street property from the older and probably smaller one on Granville.

M. Lester Dance Academy ceased to be in Maud’s name in 1923. She would have been about 54, then. From 1923 until 1931, when the school seems to have ceased operations, it was known as Lester’s Dance Academy (F. W. Lester, proprietor).

Maud’s final years are as opaque as her very early years. I don’t know why she apparently withdrew from the dance school. Was she ill? Was she simply tired of the daily grind? I haven’t been able to track down her death certificate, but I know that she died in 1943.

Frederick was retired from the business by 1934. By 1935, Lester Court was no more; it was then known as the Embassy Ballroom and was under new management. Frederick died in 1946.

The building that housed Lester Court still stands today. See here for what it has been called at different times since the Lesters retired. 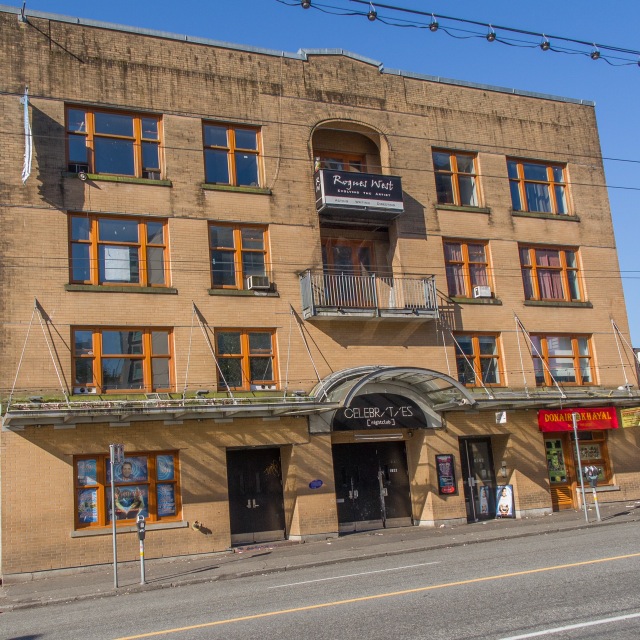 *Dorothy died (of cause unknown to me) when she was just 13.

**Note Maud’s professional designation as a Member of the National Association of Masters of Dancing. See here for more about this American organization.

12 Responses to The Lesters and their Dance Schools/Halls