Camera Craft was a long-running monthly periodical published by the Photographers’ Association of California which (thanks to Internet Archive) is easily accessed today. There are interesting articles of enduring interest to a camera-savvy readership. But our attention here will focus on  a few mentions made of the Vancouver/New Westminster branch of the association in the 1920s.

The photo above puts faces to the names of some of the photographers featured in VanAsItWas. W. H. Calder is one, so is George T. Wadds and W. J. Moore. Some of the gents in the photo above have not, up to now, appeared in VAIW. Why? Most of those whose work isn’t included in VAIW were principally studio photographers (e.g., Chapman, Bridgman, Rowe, and McKenzie) and this blog tends not to show many studio images (street photography is my emphasis). John Vanderpant was a landscape and a studio photographer, but unfortunately none of his landscape work is included among the City of Vancouver Archives or VPL Historical Photos collections.

There are a number of prominent photographers who were active in the 1920s who were not on the executive committee of the V&NWPA (locally/informally known, I believe, as the Vancouver Camera Club). Stuart Thomson and Leonard Frank leap to mind as two examples. It could be that they were members of the club but not on the executive. Or they may have been too busy making their careers at the time (for Thomson, the 1920s were certainly his most prolific decade).

In a 1927 issue, the following list of photographic sub-genres appeared in a Camera Craft description of a Vancouver area show of photographs:

[It] occupied two spacious floors with its 2500 prints. These came from twenty-three countries besides the local contributions and comprised a variety of branches of the art and the craft: aerial, criminal investigation, finger prints, astronomical, pathological, X-ray and the usual portraiture and commercial work. (Camera Work, December 1927, 596)

In addition to the ‘branches’ mentioned – a couple of which tried my imagination – please note one category which got no mention at all in this list: street photography. 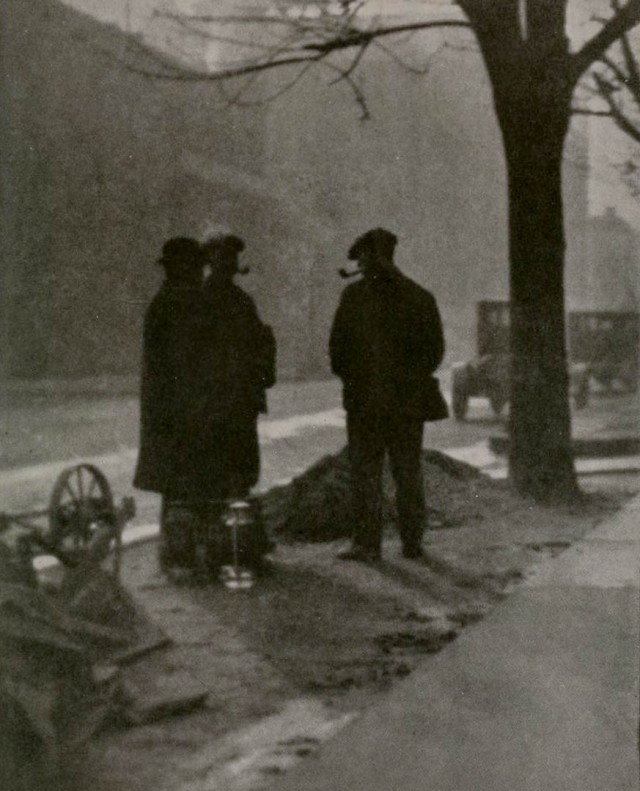 Vancouver photographers saw the work of Edward Weston and Imogene Cunningham at the Vanderpant Galleries [at 1216 Robson] in 1931 and followed the ‘great debate’ in the pages of Camera Craft where the ‘fuzzy wuzzies’ railed against the “sharp and shinies” in an extended dialogue that lasted from 1934 to 1941. Vancouver photographers… participated in these discussions through their involvement in the the journals and the exhibitions. (Pakasaar, Vancouver: Art and Artists 1931-1983, Vancouver Art Gallery, 49).

John Helders (1888-1956) was a Vancouver amateur photographer. His image above of workers waiting for their work day to begin, seems to be evidence that Helders was of the ‘fuzzy wuzzy’ school. For a Camera Craft image from a Vancouver photographer that is a bit closer to the ‘sharp and shiny’ (aka f64) category, see this one by Hugh Frith.

Camera Craft. May 1926, p242. This photo, made for Camera Craft by an unknown photographer, was taken at the annual banquet and dance of the V&NWPA, “held at Princess Cafe”. (VAIW note: I think the location was actually Prince’s Cafe – located at 560 Granville).