The Vancouver Vagabonds was a men’s club. It didn’t last long (1914-1928), but it was fondly remembered by former members long after it had ceased to exist.(1)

The Vagabonds are generally believed to have been the creation of J. Francis Bursill (1848-1928). Bursill, an art critic with the Vancouver World (who was known by the pen name Felix Penne), was a member of the Vancouver Poetry Society, the Dickens Fellowship, the Shakespeare Society, and was founder of the Bursill Institute and Free Library in the Collingwood neighbourhood.(2)

Lionel Haweis (1870-1942) was responsible for the design of the Vagabond crest (the club motto was “Loaf and Liberty”). His vagabondian role was Scribe (or what would have been known as Secretary, had this been been ordinary club!) for several of the club’s early years.

The club’s crest, designed by Scribe Haweis. Motto of the Vagabonds was “Loaf and Liberty”.

What was the purpose of the Vagabonds? In a word, fellowship. But it was a sort of fellowship that wouldn’t have suited all men; and, indeed, it seems to me that the sort of fellowship promoted by Vags (as they called themselves) was of a sort that would be difficult to sustain in the post-WWI period (thus contributing to an explanation as to why the group petered out in the years after the war; more on that, shortly).

Vagabond John Ridington (1868-1945), UBC’s first head librarian, summed up the point of Vagabond meetings in speaking notes prepared for a Vag Salon at which guests and spouses of Vagabonds were present:

In some respects the Vagabond Club is a unique institution. In miniature it corresponds in some respects to the famous Garrick Club of London and the equally famous Lambs of New York.(3)  Wealth or social position are not in themselves sufficient recommendation for membership….We welcome cranks, but bar bigots. . . . At times, serious and earnest enough, but we decline to take ourselves, or each other, too seriously. . . . We all long for the carefree life – to forget taxes [and] bills. . . – and be like grown-up children, enquiring, joyous, and irresponsible.(4)

At times, serious, but like grown-up children. That seems well to sum up the men who were Vags. Papers of a semi-academic nature were presented at meetings and literary, musical and theatrical efforts were encouraged. But there was also an emphasis on verbal jousting (5), word-play, and the absurd.

That sort of light-hearted spirit which evidently was present in Vancouver Vagabond meetings did not (and, arguably, could not) survive WWI and its cost of nearly 61,000 young Canadians. Further, A. C. Cummings (1885-1976), who was Editor of the Vancouver World, maintained that some of the best men associated with the Vagabonds in the club’s early years had later moved from Vancouver (like Cummings himself, who settled in New Zealand), had become weary from old age, or died. According to Cummings, at its end, there were no longer “energetic” men who were still Vagabonds who could hold the club together. Notably, Bursill died in 1928, the year the club wrapped up its activities.

For most of its life, the Vancouver Vagabond Club did not have a fixed address. This was doubtless part of the code of being a ‘vagabond’, a drifter. Among the halls and other spaces that Vags called home were: the University Club (310 Seymour), a room across from Forester’s Hall (at 930 East Pender), Brotherhood House (233 Abbot) and Glencoe Lodge (1001 West Georgia). For the quarterly salons (sometimes referred to as galas), they met variously in the University Club, the Dining Room of Spencer’s Department Store (as shown in the first image above) “the Lodge at Stanley Park”(6), the Hotel Vancouver (No. 2), Hamilton Hall (a former home of First Baptist Church at Hamilton and Dunsmuir), and at the homes of various Vag members.

There was a women’s club, the Comrades in Arts Club, which has sometimes been linked with the Vagabonds as having been a sort of Vagabondian women’s auxiliary. According to correspondence from A. C. Cummings, however, there was never such a link. Apparently a number of spouses of Vagabonds (including the wife of Cummings) were members of the Comrades, and that may have given the impression of a connection, but that was never the intention of the Vagabonds, according to Cummings (Letter from Cummings to Hooper, Nov. 2, 1967).

The Vagabonds played a lead role in establishing the Shakespeare Garden in Stanley Park on the tercentenary of the Bard’s death in 1916 (the quatercentenary of his death was in 2016). This, at least, was the impression in news items of the time.(7)  Cummings recalls events slightly differently. He said that Bursill was “wholly responsible for the creation” of the Shakespeare Garden (Letter from Cummings to Hooper, Jan. 1, 1967). He noted that the opening of the Garden by the wife of the Park Board Chairman at the time, Jonathan Rogers, was “attended by the Vagabonds in force”. Cummings’ claim that Bursill single-handedly organized the Shakespeare Garden strikes me as improbable. There was, after all, a Shakespeare Tercentenary Committee which is (according to CVA) pictured below at the opening of the Garden by Mrs. Rogers (the bearded fellow on the left of the image appears to be Bursill). 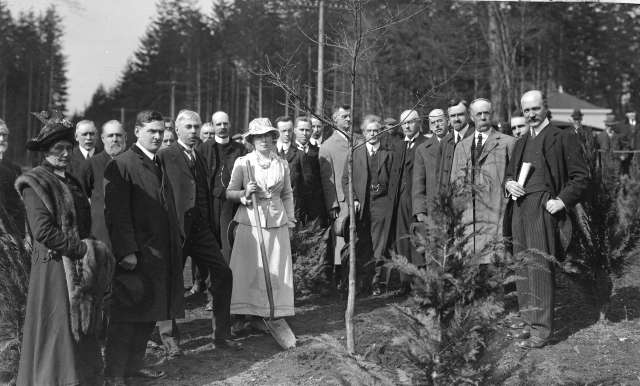 (1)  I am indebted to Jacqueline Hooper for her research into the Vancouver Vagabonds, carried out in the late 1960s while a part-time VPL librarian and freelance writer. Hooper’s work was funded by the the Leon and Thea Koerner Foundation. Since Hooper was working in the 1960s, she had access to the living memories of some who were Vagabonds or spouses thereof. There seemed to be a longer-term plan that her research would be used as the basis for a monograph or book about the Vagabonds (and a MS by Hooper is included with the collection of Vagabond materials held in UBC Library’s Special Collection). To the best of my knowledge, such a document was never published.

(2) Bursill’s role as Vagabonds founder is mildly disputed by A. C. Cummings. In the opinion of Cummings, as an early Vag himself, the principal mover behind the club’s formation was UBC Library staffer and founder of the Rosetti Photographic Studio, Lionel Haweis (Letter from Cummings to Hooper, January 1, 1967). (There is a brief anecdote relating to Bursill in a letter from Vag Francis Dickie: “There are a great many anecdotes about [Bursill]. The only one I remember you probably don’t want to use: A Hindu acquaintance of mine, speaking of Bursill said ‘He is not very cleanly in his habits.’ A beautiful understatement.” (Letter from Dickie to Hooper).

(3) This is the only reference I’ve seen to the Garrick Club or the Lambs Club of NYC as possible forbears of the Vagabonds. More typically, when casting about for organizational family tree roots, Vags tended to refer to the Savage Club (London).

(4) In the April 3, 2013 issue of the Renfew-Collingwood newsletter, Paul Reid quotes “An Ode to the Vags” (which he seems to have unearthed from CVA’s Vagabonds collection). This poem, which claims to have been written by “Box Car Jimmy”, was probably penned by a Vag.

(5) I’ve noticed from time to time, descriptions of club meetings that borrow from Proverbs (27:17): “Iron sharpeneth iron; so a man sharpeneth the countenance of his friend.” This suggests that character-building (although of a secular nature; religion and politics were the two subjects that were verboten at Vag meetings) was part of the purpose of the Vagabonds.

(6) It isn’t clear to me whether this was a reference to the Stanley Park Ranger’s Lodge (which doesn’t appear large enough to hold a salon group of the number shown above in 1924) or to the Pavilion behind Malkin Bowl (or to another building?)

1 Response to The Vancouver Vagabonds