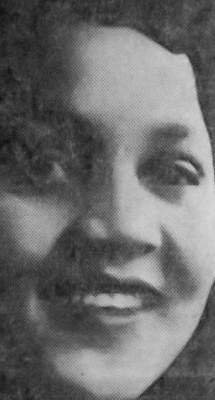 The first appearance I found of Miss Fuller in Vancouver newspapers was in a review of ‘Harlem Cabaret’, sponsored by the BC Institute of Journalists in October 1929. The review was written in a manner that would be described today as somewhat offensive; this near-final paragraph mentions Jean: “[A] group of dancing beauties presented some clever numbers that were the very raciest of entertainment and helped to put the cabaret over [as in ‘over the top’, I assume]. Then at the dusky midnight hour Jean Fuller and Joe Wilson, two of Harlem’s own folk, sang and danced to the delight of everybody” (Sun, 29 October 1929).

I suspect “Harlem’s own folk” was meant to be a clever way of making the point that Wilson and Fuller were black without saying so (I’m pretty sure that Jean, at least, never lived in Harlem).

Jean was born ca1897 in Texas – probably in or near Houston – to Frank Fuller and Ada White. I haven’t been able to learn much about her early life, but have found out that Jean was a graduate of a Houston school for “colored” young people. It was called the Houston Baptist Academy (later, Houston College for Negroes; today, Texas Southern University), and was founded in 1885. Mention is made of “Jeannie Fuller” in a 1906 review in the Houston Post. Jean played a leading role in a musical produced by the Academy’s music department that year. It was called Ruth the Moabitess, and was based on the Old Testament story of Ruth (in the biblical book of the same name). Jean played the soprano part of Orpah (Houston Post, 12 May 1906).

That is all I was able to learn of Jean’s early life.

The question of what motivated Jean to move to Vancouver has not been answered in my research. Whatever the reason(s), she seems to have settled here sometime in 1926, when she was about 30. Period directories show Jean from 1926-28 as the resident proprietress of Alter Rooms at 620 Powell (near Princess; two blocks east of Oppenheimer Park).

An early appearance by Jean in the Vancouver press was in March, 1931 in a public note of thanks from Mr and Mrs Ross Hendrix – parents of Jimi – for her singing at the funeral of another son, Leon Marshall Hendrix, who died at age 17 that year and whose service was at the African Methodist Episcopal Church near the heart of what was then Vancouver’s black community, Hogan’s Alley (Sun 24 Mar 1931).

By 1934, Jean bought what became her home for many years at 1124 Seymour, on the east side of Seymour just south of Helmcken, near the apartment block known today as Brookland Court (what was, in Jean’s day, called Lightheart Apartments). Today, the location of her home/club would have been at the northern end of Emery Barnes Park.

CVA 99-691 – ca1918. Stuart Thomson photo. I believe the home that is only partly visible in this shot is what was Jean Fuller’s business and home at 1124 Seymour Street. Neither that building nor the one which housed Central Garage in 1918 is still standing. The 6-storey apartment block remains on the corner. It was known at the time as Lightheart Apartments; today it is called Brookland Court).

Jean’s Seymour Street home also served as an unlicensed, informal nightclub which was widely known alternatively as “Nigger Jean’s” (she so named it, apparently) or as Jean’s “Chicken Inn”. About Nigger Jean’s, former Orpheum Theatre manager, Ivan Ackery, had this to say:

Jeannie’s place was full of well-known people. It was THE place to go and all the well-to-do met there. A lot of them used to get drunk and stay overnight. When you’d go in she’d whisper, “Don’t make too much noise now… I’ve got General So-and-So or Governor So-and-So asleep upstairs.” Jeannie sang the blues in the club and she used to bring in black entertainers – girls whom she’d find work for in various clubs around town.

Because of the prominent status of many of Jean’s guests at 1124 Seymour, it was tricky for Vancouver Police Department officers to slip into the place undetected to see whether there were bootlegging or other liquor-related charges which they could lay against Jean and her guests. But on at least a couple of occasions the VPD successfully entered the premises. One of these was in 1943; Jean was charged with allowing a patron to consume liquor in a restaurant. When the charges came before a magistrate, the question arose as to whether 1124 ought to be regarded as an ‘unlicensed restaurant’ (as the VPD claimed) or as her home in which she served chicken dinners to friends (as Jean said). Ultimately the magistrate decided in favour of the VPD’s definition. But before he did so, Magistrate H. S. Wood “remarked [in court] that he had heard of the house but never had the pleasure of going there.” Jean replied: “I’ll gladly cook you a chicken dinner.” The magistrate didn’t indicate whether he’d accept Jean’s offer (Sun, 24 Apr 1943) – at least he didn’t so indicate during court proceedings!

Don was born in Mountain Station, ON and lived for some of his early years in Calgary. He tried to enlist in the Canadian armed forces in 1916, but was quickly discharged for lying about his age (he claimed he was born in 1897). He identified his occupation as early as age 16 as “musician”. It isn’t clear to me what Don was doing between 1916 and 1922, but he was in Vancouver by 1921. An ad in an issue of the Vancouver Daily World showed Don playing piano that year (with “Don Flynn’s Novelty Orchestra”) at the Patricia Dansant – a dance joint attached to the Patricia Hotel on East Hastings. The 1927 Vancouver Directory indicated Don spent at least part of that year playing at the Empress Theatre. And there is further evidence of that in an ad from the periodical of the BC musicians’ union; he was playing the Empress for awhile with Frank Maracci. But there is no mention of Don in directories again until 1935, where it was noted that he was playing at the Commodore Cabaret. In the early and mid-1940s, it looks like he played piano for the CPR Orchestra.

Don died very early and tragically in November 1948. His death certificate describes his death as being by “misadventure”; the principal cause of death was accidental poisoning by him consuming methyl alcohol. He was buried at Mountain View Cemetery.

The years of WWII seem to have been good years for Jean’s singing career. In December 1939, “the well-known Jeanie Fuller and her artists” provided entertainment at the Eburne Hotel for that year’s “New Year’s Frolic” (this may have been an early event which ultimately evolved into the “Screwball Frolic” events of the 1940s (Sun 28 Dec 1939). She had supporting roles in Theatre Under the Stars (TUTS) productions, such as “Hit the Deck” (Province, 11 Jul 1944) and in the mid- and late-1940s she sang at the Mandarin and Cave supper clubs.

Jean remained at 1124 Seymour after Don’s death through 1950. But in 1951, she moved to Suite #3 at 839 W Pender Street (the Massey Block – between Hornby and Howe). By 1954, Jean was still residing at 839 Pender, but she also was also proprietress of a short-lived entrepreneurial venture – an eatery called the “Jeannie Cafe” at 814 East Hastings. It didn’t seem to last for more than a year or so.

According to Ivan Ackery’s memoirs, Jean worked in her later life as ‘Aunt Jemima’ at the PNE and, finally, as a women’s room attendant at a local cabaret. He noted that she returned to “her home” in the States (to Texas, presumably) where she died “some years ago” – in the 1970s sometime, I assume, since Ackery’s memoirs were published in 1980. (Ackery, 120). (I could find no evidence to support Ackery’s claims about Jean’s later career, but I have always found the facts in his memoirs to be accurate.)

¹Many thanks to Robert of WestEndVancouver for very tactfully making a couple of corrections to this post.